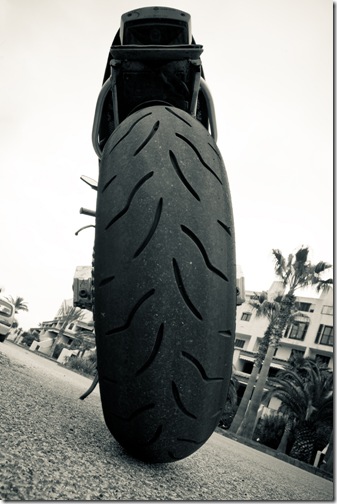 Well, I’m not quite sure what to make of these tyres. They feel so very different to the Michelin Pilot Powers I had before. I like the look of them and I like that the tread doesn’t go right to the edges unlike the Pilot Powers. This just makes sense to have as much rubber on the road at extreme lean angles. There’s no need for getting rid of water as you wouldn’t be leaning to the edge of the tyres in the wet. Well, not unless you were completely mental that is!

The shape of the tyres seems very round with a symmetrical radius and this is noticeable on the road. When in a corner you can choose the angle of the bike whereas with the Pilot Powers the bike would lean over always to the same point. It’s a strange sensation indeed but not unpleasant, just different.

The biggest difference is when weaving through tight S bends. The bike needs quite a lot of input from the rider to get the bike from one side to the other. It’s a fluid motion but quite unlike the Pilot Powers which almost snapped from one side to the other. That suited my small stature as the bike did all of the work. Now I have to make some effort.

The grip from these tyres is extraordinary and they seem to warm up almost straight away unlike the Pilot Powers which took a few miles. After the tyres were scrubbed in I went along one of my favourite roads to give them a proper test. The bike can certainly lean further than the Pilot Powers and frankly the angle I could achieve was ridiculous and had me laughing at the exit of every corner. I tried leaning more and more until I had my boots scraping the road. No big deal you might think but this Monster has rear sets fitted which are much higher than the original pegs and I can’t see how it’s possible that the bike can lean so far as to get my feet touching the road. It’s almost like riding on a wall of death!

Having these levels of grip is very reassuring. It’s good to know that there’s plenty in reserve if ever I need it. It will be interesting to see how long they last! The front tyre has two compounds and the rear has three which is a brilliant and very logical solution. If you look at the picture below you can see the slightly different colour on the last 25mm or so of the tyre where the softest compound is. 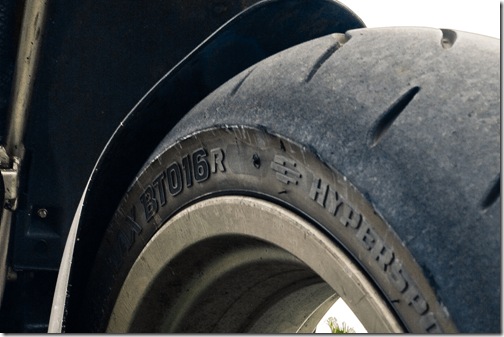 On the road the tyres are comfortable and reassuring but somehow my suspension feels too soft now, like it is under damped so this must mean that the tyres are more supple and are absorbing some of the shocks from the road. I put 2.5 bar (36 psi) in the front and 2.8 (40 psi) in the rear. This is what the guy in the tyre shop put in and it was what I used on the Pilot Powers too. The Bridgestone website is pathetic and I was unable to find the recommended settings but a few people said that they were 2.5 front and 2.9 rear so since I’m only small It’s probably about right.

Some mentioned they were running much lower pressures but this caused the tyres to go greasy after a while. I tried dropping the pressure on the Pilot Powers once but I didn’t like it so put them back. If you are going to get these tyres, I would start with higher pressures and see how you go. That said the bike has developed a twitchy front end on bad surfaces and under power and the bars slap about a bit. This never happened with the Pilot Powers. I tried lowering the forks a bit (11mm) and this has made a huge difference. Turn in seems unaffected but a bit more of my weight forward has really helped and the bike seems much more planted.

These are excellent tyres there’s no doubt about it. All that remains to be seen now is how long they last. If I wanted to be critical I would say that it takes a bit longer to get the power on coming out of bends. It feels like there is a lack of grip in the middle compound area, but it’s more probably the shape of the tyres that makes it feel like this. The Pilot Powers were excellent for getting the power on early coming out of bends and these BT016s just seem a bit slower. I would also say that they are slower to turn in and require more rider input to switch from one side to the other through the bends.

I’m nitpicking of course. The bottom line is that I am faster into the bends and faster out of them and I can lean more even though they don’t feel as reassuring as the Pilot Powers. Maybe it feels that way because I am going faster? In any case, if you do buy these tyres because you want to ride fast and have tons of grip then you won’t be disappointed.

They are not the cheapest tyres on the market but considering the technology that has gone into them I think they are a good investment. After all it’s the rubber that keeps you where you should be so not skimping on tyres is a good move.

I can’t comment about wet road riding since I am a fair weather biker but I have no doubt they would work just fine. These tyres don’t grip on the white lines and road markings in France. But then neither did the Pilot Powers. This is due to the crappy teflon coated paint they use, it’s no fault of the tyres.

Marks out of ten? I’d have to give them a 7 which is slightly less than I gave the Pilot Powers. The reason I have only given them a 7 is because of the slower turn in and somehow softer more wallowy ride they give. If nothing else, they have made me realise what excellent tyres the Pilot Powers were. Next time I would like to try the CT2 Michelins which are the dual compound versions of the Pilot Powers but sadly they don’t make them in a 170/60 size so we’ll have to see once the BT016s are worn out.