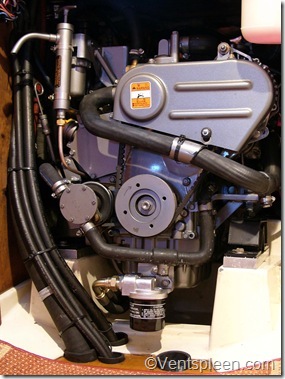 This is a first for me. I must be getting old or maybe it’s because I have finally realised the importance of taking care of things properly rather than just trusting to fate. Just changing the oil and filter regularly on a marine diesel engine should be enough to keep it running well for years but how do you really know?

There are very few instruments on a boat. All my Yanmar 3YM20 has is an oil light, charge light and a temperature light. This is all very well but it gives no indication of gradual changes like a regularly studied gauge might so what can we do about it?

This engine is actually a replacement from Yanmar as the original engine was nothing but trouble with repetitive coolant leaks, exploding water pumps but worst of all, a clogged exhaust riser after just three years use! I won’t bore you with the details but it seems that the cast iron exhaust riser Yanmar sell is one that was originally fitted to an 8 hp engine 40 years ago and is ridiculously small inside which is why it clogged up so soon.

Never in twenty years of sailing had I seen a riser clogged that badly that quickly. It just goes to show what can go unnoticed until it becomes so bad that the engine begins to suffer. The worst case scenario of this is that when the exhaust gases cannot escape, some of it makes its way into the engine and then into the oil. Microscopic pieces of carbon act like sandpaper on the bearings and slowly destroy the engine and you won’t even know.

It is incredible that Yanmar still sell this tiny riser and for a shocking price as well! They get around it by telling you to check the riser for clogging every year! I have talked to a lot of marine engineers and they agreed that it could do no harm checking annually but that they had never seen a modern engine clog like that even after a decade.

So rather than risk that happening again I have fitted a much better quality cast bronze riser with a considerably larger diameter and the engine feels better for it. The old engine was always sluggish to pick up revs. So hopefully that will stop the same thing happening again. Of course, I could check the riser for clogging every year (and I might well do that yet) but the easier and possibly more sensible way to keep an eye on it is by checking the oil.

If I regularly get the oil from my engine analysed not only can I keep an eye on this problem but also on wear and a host of other potentially engine damaging issues. By building up a record right from the very first oil change, I will be able to track small changes. A higher rate of fuel in the oil may not be enough to cause problems but seeing the increase could indicate a problem which could be corrected long before it causes expensive damage.

Oil analysis isn’t cheap but compared to a damaged engine because you didn’t do it, it suddenly starts to look like very good value indeed. There are plenty of companies out there willing to take your money and the rate varies considerably.

After some research online I came across Blackstone Labs in Indiana. Their website was simple and easy to navigate and their terminology easy for the layman to follow. They offer a free oil test kit which is an excellent idea. They were quite happy to send it to me here in Europe, even though the postage and cost of the kit must dent their profits.

What sold me, apart from the very reasonable $25 charge for oil analysis was the site’s FAQ. You can learn a lot about a company from their website and what I learned was that this firm has a sense of humour. I will always choose the company with a quirky name or a humorous attitude over more staid and boring ones.

See for yourself. Check out a few of the questions on their FAQ here. Well it amused me so I emailed them and received a prompt and positive reply. A week or so later their oil sample kit turned up.

It contained of a small transparent plastic container about 3” high and about 1.5” wide was placed inside a bigger black plastic container. Both are made with good sealing lids. I know this sounds obvious but oil is a hard liquid to contain well. To further ensure they don’t have to endure the wrath of the post office, the instructions tell you to wrap the smaller container with your sample in it with the special absorbent square of cloth they supply, and put that into a small ziplock (also supplied) then put the whole lot inside the bigger one and pop that in the post. Brilliant.

So I waited and waited. No fault of Blackstone, but of the postal service. It arrived eventually just as I was about to send another sample off to them. It would always be wise not to throw away all your old oil before the lab has received it just in case it goes missing in the post!

As soon as they had the sample, they got on the case and I had the results emailed me just a day later. 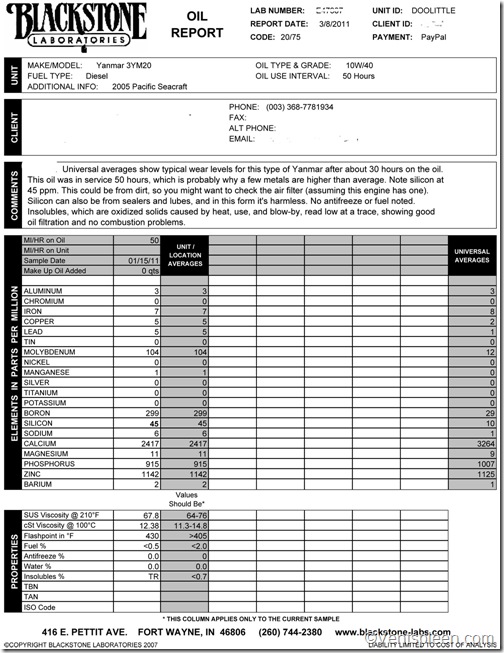 So what do all these numbers mean? Well before I go into that let me explain what goes into a standard oil analysis. Basically the sample I supplied went through 4 processes. The first was a spectral analysis using a special plasma machine. This determines what metals, elements, additives or contaminants are present in the oil. If you want to read a more detailed explanation click here

The next check is the oil’s viscosity. It’s not strictly necessary but many people want to know so it’s part of the standard oil test. Of course if for some reason you had a lot of fuel in the oil, this would show up in a viscosity test. If you would like to learn more, click here

Then the oil will be checked for insolubles, or in other words stuff that won’t mix with the oil. The insolubles are checked as a way of seeing how well the engine’s filtration is working. Again, if you want to learn more, click here

This is the standard oil analysis. There is a lot more that can be done but the standard test is generally enough to warn of any impending problems. Another important factor with oil analysis are trends. A lot more can be learned about an engine by studying previous results.

For example, if you look at the report above, it shows that there are high levels of silicone. This could be a result of a dirty environment or a poorly operating air filter. But because the engine is new, it is more likely left overs from the casting process or excess sealant from when the engine was built. The next oil analysis should show a drop in silicone levels. The sample also shows high levels of Boron and Molybdenum which are oil additives. Their presence in the oil is perfectly normal.

Without trends to follow, it’s hard to give a precise analysis of the condition of the oil. It will become clearer after a few more tests but we can learn that there is no fuel or antifreeze in the oil. There are practically no insolubles in the oil which indicates efficient filtration and combustion. In other words, my engine is healthy!

Had the exhaust riser been clogging again the test would have shown higher levels of insolubles in the test. If the engine was wearing because of excess carbon in the oil, this would show up as high levels of metals such as lead from the bearings for example. So for a mere $25 I have a much better idea of the health of my engine and the condition of the riser without even getting my hands dirty.

Further more, should I ever have problems with this engine, these oil tests I have had done will confirm any issues and also demonstrate that I changed the oil at the correct intervals and was conscientious enough to go the extra mile and get an oil analysis done on a regular basis.

But the best of it is that should my engine begin to develop problems the oil analysis will give me warning long before it becomes an expensive problem.

An ounce of prevention is worth a pound of cure. When you consider that it would cost about £8000 to replace the engine, it makes perfect sense to pay a few dollars a year for the piece of mind that an oil analysis gives.