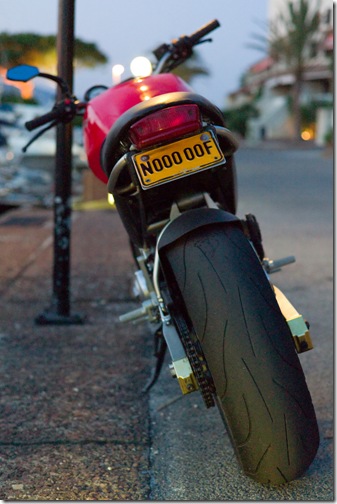 When my cousin lent me his M900 Monster it came with the noisiest pipes you ever heard. He had the pipes made up for the bike when it was new and instead of having one pipe on each side, it had them both on the right hand side, quite forward thinking at the time. It looked excellent and the sound was awesome if you like that kind of thing which I did but I didn’t think our neighbours would.

To give you an idea of how loud it was when it fired up, windows would open and people would be wondering what the hell had happened. I tried to ride it quietly but even at very low revs it was very loud. The funny thing is, I rode it like this for a few months until I could finally afford to do something about it yet no one said a word, if anything people would say they liked the sound. I have said it before and I’ll say it again, the South of France is biker heaven!

One day I arrived at a roundabout where there were 4 bike cops all standing watching me arrive, arms folded. I would get tugged for sure… I tried to keep it quiet but wasn’t fooling anyone as I burbled, popped and rumbled towards them, I just rode confidently, turned my head to look behind me as I slowed and then powered on through the round about.

Eight eyes followed me around. Obviously they were not after bikes, so just as a treat for them I gave the bike some gas, not too much obviously but just enough to really enjoy that big twin sound. They didn’t come after me and I got the distinct impression that they quite enjoyed seeing the bike. I would have been pulled over in the UK for sure. Then consider that the bike has no indicators and a tiny number plate, easily enough excuse for a British cop to bust your ass! Like I said, it’s biker heaven in the South of France.

Even though no one seemed to mind about the noise I was feeling rather conspicuous all the same so I decided to look into some quieter pipes. My original idea was to simply change the cans and leave the beautiful custom made stainless downpipes in place but I just couldn’t find anything that would fit properly and nothing looked as good as the Supertrapps originally fitted. I decided to try another approach.

Then I saw some pics of a monster with the entire exhaust under the engine. It was the Quat D Ex-Box. I liked it and it seemed that it was road legal but could be easily adapted to be louder by unblocking the top of the two outlet pipes in the box. 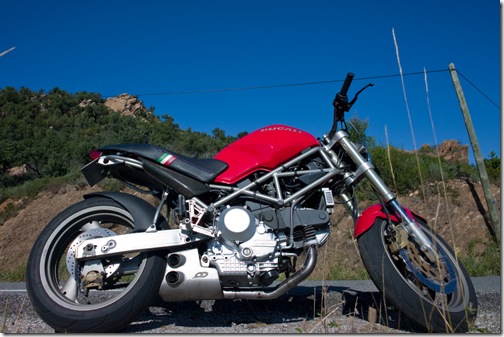 It cost a whopping 1000€ and was interesting to fit. The downpipes are made in pieces which slot into one another and are held in place by strong springs. It’s a crazy system but it looks quite funky and does work. The box itself is very nicely made and quite heavy. In theory the weight so low down and central would help with the handling a little.

The first issue soon came to light. The tyre was touching the exhaust pipe because the chain was too short. One new chain with two extra links later, we were in business. For the first test I left the exhaust road legal as supplied and started the bike.

‘Wow’ I thought, that dry clutch really is loud. This is perfectly normal of course but I hadn’t heard it before over the noise of the old pipes. The Ex-Box in legal mode is very quiet indeed. I quite liked it though for it may have been quiet but it was still deep. A test ride was in order.

As soon as I pulled away I noticed the lack of power, I reckon it lost 20% right away. Normally the front wheel will lift in first if you accelerate hard, now no matter how hard I tried I couldn’t get the wheel off the ground. The bike felt very civilized but gutless. Maybe not gutless but it had lost the immediacy of the original delivery and the power curve felt very flat.

So I turned straight around and got the allen keys out and removed the capped top hole and installed the uncapped piece that comes with the exhaust. This meant that both holes in the exhaust were now open. I started the bike. The sound was deeper and louder. Nice.

A ride soon confirmed that the power was back. I was surprised that the original pipes were so effective. Loud they might have been but they were obviously well set up. So I had achieved my goal, a Ducati that sounds like a Ducati but won’t upset the neighbours too much.

The best thing about the Ex-Box is that it makes the back end of the bike so clean and mean looking. The bike is very narrow and the Ex-box emphasizes and enhances this feature.

Everyone notices this exhaust and most people’s comments are positive. I like it because it makes a nice sound, cleans up the back end and is a little different. You don’t often see bikes with them fitted.

Conclusion: Expensive but well made, nice sounding with clean looks but you might need a slightly longer chain.