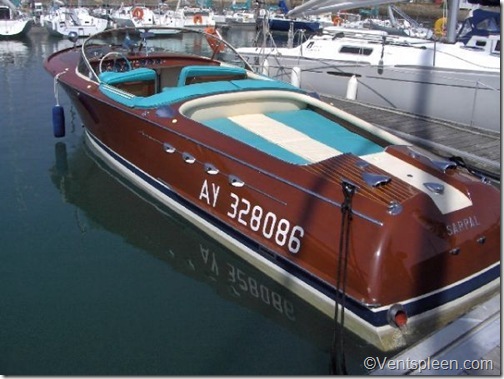 Many Rivas have the insides of the exhaust outlets painted red.

Many years ago I was lucky enough to get to play with a Riva Aquarama. This is the Rolls Royce of speed boats, an absolutely iconic wooden creation resplendent in deep thick varnish. They have been seen in films and were owned by a lot of famous stars, perhaps the best known being Bridget Bardot.

They are beautifully made, right down to the finest details so it doesn’t surprise me that good old examples can fetch half a million pounds or more. Fitted with twin V8 engines and could do about 50 miles an hour. They are sought after by water skiers because of their smooth wake.

My association with a Riva began when I was crashed into by one. It was called the Gipper and was owned by a Belgian guy who was somewhat overwhelmed by the thing. He was a bit shaken by the whole episode and seemed relieved when I offered to chauffeur him about. I couldn’t believe my luck! I was to be paid to drive him and his family about during the summer.

So while they sunned themselves, I sat on the famous Pampelonne beach at St Tropez watching beautiful girls walk by all the while being paid. When we got back to the house I had to wash and chamois the boat down. I didn’t get much instruction from the owner regarding how to look after the boat but he did say one thing. ‘The exhausts have got to be red!’

Some Rivas have the insides of the exhaust outlets painted red. It’s a completely ridiculous thing to do but since that was all that mattered to him I felt obliged to make sure that his exhausts were indeed red. Once after a day on the water I noticed that some of the red paint was missing from the exhaust pipe. It wasn’t surprising really as they were chromed and paint doesn’t really stick well to chrome.

The problem was that the exhausts were right on the water line. It was impossible to paint them like that. In the end I bought a plastic dorade and fitted it to the exhaust with a jubilee clip. Then I dried out the exhaust and using an angled brush, I was able to repaint the exhausts with some degree of success. It wasn’t easy hanging upside down on a shiny and sloping varnished transom but I did it.

Every person I have ever worked for has always had something that they deem important, often it is a quite inconsequential issue but when you have spent a small fortune on a boat it’s not unreasonable to expect a certain degree of control. I make it a point to listen to an owner and find out what is most important for them. Then it is a simple matter of making sure that I do it. That way they are happy and if the owner is happy, then I am happy.

And so was born the ‘red exhaust situation’. Since then its usage has spread throughout the yachting community to mean something that matters to an owner, no matter how ridiculous you might believe it to be.