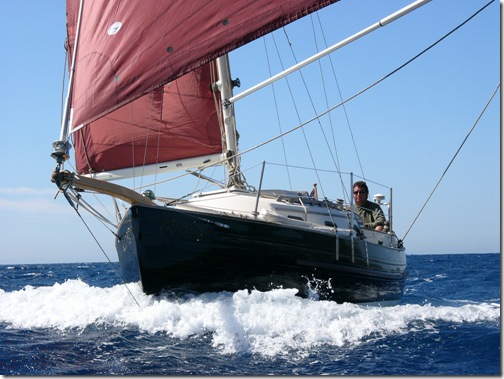 Leica Digilux 2, The mighty Flicka ‘Caraway’ with a big fat bone in her teeth.

When my good mate Angus asked if I would help him deliver his boat to France, how could I refuse? After all, it was entirely my fault he bought his boat in the first place, so I was duty bound and in any case it would be a laugh and a damn sight better than working! The canals seem intimidating at first, well, most new adventures hold some trepidation, but like most things, once you’ve got over the initial fear you realise that there’s nothing to it. Anyone with even a small level of common sense and half a brain could cope with anything the canals could throw at you. It’s true that potentially there are plenty of dangers but most of them can be avoided with the aforementioned common sense.

Perhaps the most scary of all the hazards are the Peniches, these 100 feet long steel barges transport goods all over Europe. They may only move at a fast walking pace but they weigh tons and are hard to steer and stop. The best advice I could give to anyone contemplating the canals is to remember the adage, Might has Right. What this means in real terms is that no matter what the rules say, the barges are bigger than you, so just get out of their way. In the hundreds of miles of cruising that I did in the canals I only had a couple of close shaves with Peniches. There are some who resent the presence of cruising boats. They are doing a job and we are on holiday. However the majority of them are decent, hardworking people.

We had entered the canals at Calais and were making good steady progress southwards. We were approaching Reims (pronounced RAHNSE) in Champagne country, when we had our first pulse racing moment. We had just entered a big lock and tied up near the front. It is my experience that if possible, it pays to be stationed as far from the lock gates as possible because when the water comes in to fill the lock, there is a lot of turbulence and this makes it harder to hold the boat. Angus was down below making tea and I was on the cabin holding the ropes when a peniche entered the lock behind us. It was unladen and very high out of the water. He seemed to be coming in at quite a pace but I wasn’t worried as an empty peniche can stop very quickly. However, my inbuilt sense of self preservation meant that I kept my eye on him. It soon became apparent that he wasn’t slowing down. Angus appeared in the cockpit and gave me the ‘what the “$%^’ is happening look. It was still possible that the Peniche would stop but we were fast approaching the point of no return. A decision had to be made. Quick as a flash, I yelled ‘Start the engine! Move! NOW! Angus needed no further persuading as the bows of ‘Roger’ the peniche towered over us. I threw the lines off as Angus slammed the engine into gear at full speed. Caraway moved forwards just in time. We didn’t have far to go to the end of the lock but it was enough to avoid a nasty incident. Had we not moved we would have been run into. The Flicka is a tough little boat and I doubt we would have sunk but it would have been most unpleasant indeed.

The peniche driver, a balding, unshaven, sad looking man with his hairy gut hanging out of his stained string vest, walked forwards to see if he had scared us sufficiently. He obviously didn’t like cruising boats and took great pleasure in terrorising them. He stared down at us from his perch 15 feet above us and gave us a sneer. We ignored him. Gus was fuming, he couldn’t believe that someone could be such an arse. Having lived in France for a number of years, sadly I could.

Once the lock doors opened we wasted no time is getting out before ‘Roger’ ran us down. It was quite clear from his attitude that he would not wait for us to leave, and if we were still messing about with our ropes he would run us down, no doubt claiming that he didn’t see us.

As soon as we could, we pulled over to the side to let him past, no way we wanted him behind us. He roared past, never even glancing at us and we pulled back into the centre of the canal in his wake. He must have been doing almost 8 knots already. Good bye and good riddance we thought.

Cup of tea in hand we tried to get into the relaxed mood we had enjoyed ever since we first entered the canals, but ‘Roger’s’ attempt at killing us rankled. While I was studying the map to see where the next lock was, an idea began to take shape. The next lock was just 3 kms away, or about 20 minutes at full speed, if we ‘went for it’ there was just a chance that the lock keeper would wait for us. Every time a lock is operated, water is lost from the canal systems and because water is scarce, I knew that the ‘Eclusier’ would not operate the lock if there was another boat in sight. The French can be notoriously lazy and this also worked in our favour.

I explained my idea to Gus who thought it was worth a try and we opened up Caraway’s little engine until the valves were almost jumping out of the cylinder head. We kept our heads down to reduce drag and cut every corner in order to save a few feet. After 15 minutes of hard motoring we came around a bend and there less than one km away was the lock. We could see Roger inside and the lights that give permission to enter were still green. Would they see us in time? Unfortunately, there was a bridge spanning the canal before the lock and it blocked the lock keeper’s view of the canal where we were.

We kept going flat out anyway but felt deflated when the doors started to close and the lights went red. We slowed down, our efforts in vain. Oh well. Then as the doors had almost closed, they stopped and miraculously started to open again. Could it be that the lock keeper had seen us? Yes, the doors were definitely opening and the green light confirmed our deepest hopes. ‘You can slow right down now mate’, I said to Angus, who, with a cheeky grin backed off the revs until we were crawling along.

It took us a good ten minutes to get to the lock and the fat bloke on ‘Roger’ was red in the face and clearly upset. He was standing there by the wheel house on his barge, arms crossed and staring at us. As soon as we were close enough he started having a go. I didn’t catch all of it, his accent thick with argo, but I did understand that he was miffed with us, that he didn’t have all day to wait for an escargot! We tried to hold back our smiles and smugness. In response to his rantings, I merely suggested he talk to the eclusier about it, not us.

We felt very content. We had wound ‘fat bloke’ up badly and as soon as the lock had filled and the gates opened, he roared off and left us in cloud of black diesel smoke, no doubt his way of getting back at us. We couldn’t care less, we had ‘had’im’ and he knew it. As we chugged out in his wake, I wondered how far the next lock was. I couldn’t believe it, it was just 3 kms away. That meant we might be able to get him again. That would be too good to be true.

Laughing with mischief we opened up caraway’s willing engine again and followed the ever fading Roger. As the next lock approached you could almost sense ‘fat bloke’s’ urgency to get the lock gates closed before we arrived but it was to no avail. The lock keeper was not going to be hurried and once he saw another boat arriving, he simply waited for us. As soon as it was clear to us that we had been seen, we slowed right down again. This time when we entered the lock, ‘fat bloke’ didn’t even look at us. We had him beat and he knew it. Whether he knew how hard we had tried to wind him up is debatable. We didn’t care. It was perhaps the finest example of poetic justice ever seen. It was truly beautiful and a wonderful end to an unforgettable few days in the canals of France”. 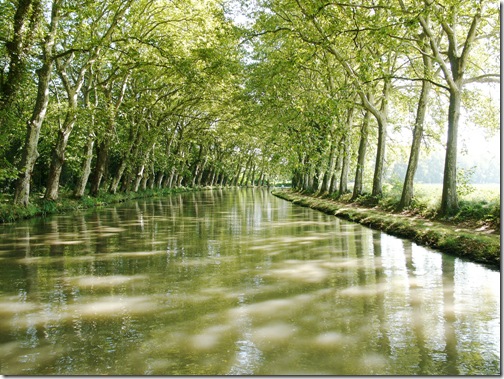