How to tie on a fender 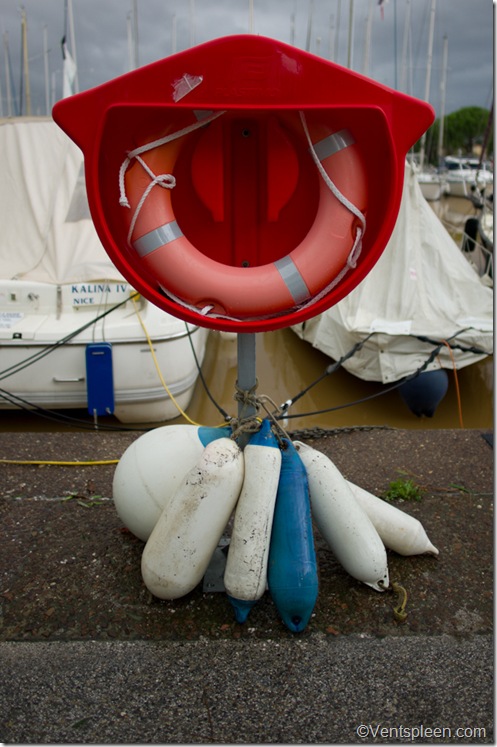 Leica M9 21mm Summilux. The fenders I recovered from the water after a good blow. It happens every time and could be so easily avoided if people only used the right knot!

Many people think that the correct way to tie on a fender is to use a clove hitch. It’s true that this is a very easy knot to tie and it looks pretty. It is easily undone for adjusting or removing but this is the very reason why it’s so unsuitable for tying a fender.

The only way you can be sure that your fender will not come undone is to either tie it on with a bowline, which looks awful and is hard to adjust, or use a round turn and two half hitches. This classic knot may not look as elegant as a clove hitch but it has the advantage that it stays done up.

The clove hitch is fine for hanging a fender as decoration but if it needs to work as a fender it will probably come undone. As soon as the fender squeezes up against the boat next door a lot of force is put on it and unless it is tied on properly there is a good chance that repeated actions will loosen the knot and you will lose a fender. Bad for two reasons, one because you have lost a fender and two because your boat is no longer protected!

Last week we had a bit of a blow here in the South of France. In the marina someone measured 82 knots! The carnage afterwards was quite something to see. Many boats sank or were damaged. Sails became unfurled and destroyed themselves and often the boat next door.

Wandering along our pontoon in the morning I found no less than 6 fenders floating free. (see pic above)  My fenders were tied on with round turns and two half hitches. I didn’t lose one fender. Yet after every blow I always find rogue fenders floating about.

The doubters can argue until they are blue in the face, all I know is that no fender has ever been lost that I have tied on with a good old round turn and two half hitches.

One thought on “How to tie on a fender”