A nice cup of tea 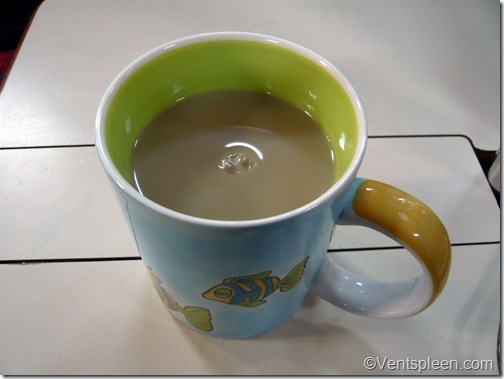 Tea. The British cure all. Been in a car crash? Cup of tea. Just been burgled? Cup of tea. Almost every UK sitcom will include this ritual at some point. The good old ‘cuppa’. Personally I prefer coffee but being English I am genetically programmed to be able to make a ‘lovely cup of tea’.

On top of this natural ability to make our national beverage I have had a lot of practice. My other half drinks only tea and every morning for the last decade and a half I have made her a cup. That makes over 5000 cups alone but I also make her many other cups during the day so there is no doubt that I have made tens of thousands of cups of tea in my life. You could say that I am an Authori-tea. (Sorry, I just couldn’t resist).

The French are amazing with wine. I once bought a bottle for a friend who had found me some work. It was wrapped up in brown paper but the shape was still defined. I popped it on my mates desk and he said, ‘Thanks, I love a Bordeaux’. He could tell from the shape of the bottle where the wine came from. On the other hand, they know nothing about tea so it is a great pleasure to share one’s knowledge and have a bit of fun at their expense at the same time.

When we go to visit a French person, they always offer tea because they know that the Brits drink tea but it is inevitably Liptons. Now we take our own T bags and make them a proper cup. They always love it and ask how it’s done. The first thing we tell them is that Liptons is sold to the French because no one else will drink it. No Britain would buy Liptons unless he was desperate. We tell them that Liptons is simply a collection of all the dust and crumbs from the tea making process that is swept up and bagged then sold to the French. It’s not true of course. Or at least I don’t think it is but it makes for a good story.

The first rule in making a decent cup of tea is using a decent brand. Of course there are plenty of brands of tea available in the UK and many of them are very good. But if you like Earl Grey tea (flavoured with bergamot) then only Twinings will do.

So here it is. Simply put, how to make a decent cup of tea.

A mug is best for tea. If you use a cup, you may find the tea is too strong. One tea bag makes a perfect mug of tea in most cases.

Place a tea bag in the empty mug.

As soon as the kettle boils pour on the water and fill up the mug.

Lift the bag up and down in the mug a few times to make sure it is properly wet then leave the bag alone for a couple of minutes. (if you like strong tea leave it longer, weak tea, remove the bag sooner. 2 minutes will make an average strength mug)

After a couple of minutes, lift the tea bag out and squeeze it dry using before throwing it on the compost heap or in the bin. (I use the tea bag wrapper and fold it around the bag so that I do not burn my fingers)

Now add a splash of milk. What is a splash? This depends on how you like your tea but it’s not much, less than 5%. You are aiming for a nice light brown colour (see pic above). Better to add some milk and if it’s not enough then you can add more rather than making a cup that is too milky. If you do there is no way to restore the balance so throw it away and start again.

That’s it. You can add sugar too if you want it. It seems so simple doesn’t it? If you follow these instructions you will consistently make a great cup of tea. The most important thing is to pour the water onto the tea bag, not fill up a cup with water and put the bag in and NEVER add milk until the end.

If you want to make a pot of tea, then it is slightly different to a Mug but the same basic principals apply. You might make a pot of tea if there are a few people or you like more than one cup. Personally I prefer a tea bag in a mug. Tea brews the longer you leave it so your second cup from a pot can be much stronger. Some people like this.

Warm the pot using boiling water from the kettle. Pour some water in and swill it about. Leave it for a minute and then pour it away.

You can use loose tea or tea bags, the end result is the same. One teaspoon of loose tea is about the same as one tea bag.

Add one bag per person plus one for the pot. So for two people, add three bags (or spoons). The reason for the extra bag is to allow for the greater volume that a pot has over cups.

Boil the kettle and pour the water into the pot. Stir the bags or tea with a spoon and put the lid on the pot and a tea cosy if you want to keep it hot longer. Leave it for a few minutes to brew before pouring.

Now, previously I mentioned that you NEVER put the milk in before the tea, but in fact that was just when you are making a mug of tea with a tea bag. When the tea is made in a pot you can add the milk before or after. There are many who insist that the milk should go in first. Personally I can’t see that it makes any difference.

Technically, it seems to make sense to pour the tea from the pot into an empty cup or mug, then add sugar if you want it. The sugar will melt more thoroughly in hot tea. If you add the sugar after the milk has been added the tea will be cooler and the sugar won’t melt so well.

So if it was me I would do it like this:

Then add sugar if you want

Then add a dash of milk

If you do add the milk first or the sugar after you won’t be committing a social faux pas but I believe you’ll get a better cup of tea if you do it my way.

So there you have it. Enjoy.