What a tool. The Bosch electric screwdriver 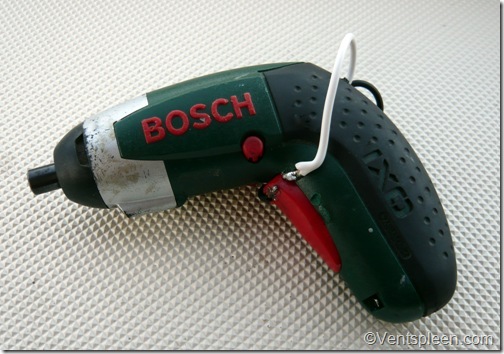 A great little tool that could be brilliant with just a few improvements. Cables coming out of the back are not standard, read on to discover why they are there…

This little power tool was given to me by a grateful client. It came in a metal box like a cake tin. Inside was a little green electric screwdriver with a pitiful 3.6 volt motor. As a boat builder I confess that my first thoughts were not kind to it. One of the first things one learns when starting to work with boats or wood is that cheap tools are not worth buying. They are generally not up to the task in the first place or don’t last 5 minutes. And so began my relationship with this Bosch electric screwdriver.

What surprised me is just what a great little tool this is. It is shaped like a very curvy banana and it has a grippy covering so that it is surprisingly ergonomic, well balanced and comfy in the hand. It is light and this is important when using a tool at different angles and heights above your head. It is surprisingly powerful considering its size and can exert almost the same power as you with a hand screwdriver. It comes with two different heads, one with a clutch and one at 90 degrees. Very versatile.

It gets better. There’s even a little light on the front which shines on the screw you wish to undo and this is very handy indeed when working in dark lockers and hanging upside down. It even has a charge indicator which glows red when the power is starting to get low. There are two green lights which show the direction the screwdriver is set to.

It charges by dropping it into a cradle. The cradle also houses a removable set of screwdriver bits which is useful. It takes about 12 hours to properly charge the screwdriver but if you get into the habit of popping the tool into its cradle when not using it, it usually stays charged long enough to get the job done. Another nice touch is the fake socket on the base of the cradle so you have somewhere to put the cable when you put it away.

It’s been in my tool bag for a couple of years now and gets used often. When working with others, often they borrow it and all without fail comment on how excellent it is. It can’t do very big screws but for taking apart a yacht interior it’s perfect.

When it was a couple of months old, it suddenly stopped working. I took it apart to see if I could see anything wrong but it looked fine so I put it back together again and then gave it a really good whack against a solid table and to my surprise, it started working again. It worked like that for two years until the other day it stopped working, this time for good. When I took it apart I discovered that the switch that controls the motor had perished. Normally at this point I would throw the tool in the bin and curse the world we live in for only making cheap products that are cheaper to replace than repair but I was so attached to it that I decided to spend a little time trying to come up with a solution.

The switch in question was tiny in size, just a few mm long so there was no chance of working at that scale so in the end I simply soldered two wires to the back of the PCB where the switch was soldered in and led them out through a hole I made in the back of the tool. 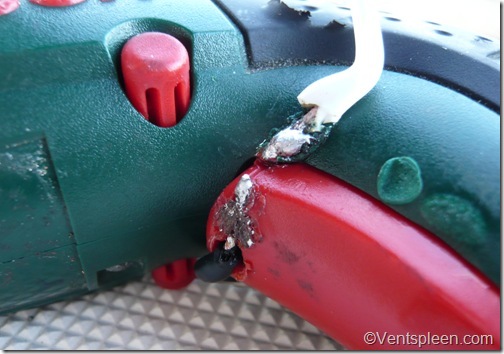 Crude as, but it works. When the cables touch, the motor operates. What more could one want?

Then I soldered the ends of the cables before laying them on the body and trigger and then heating them with the soldering iron until the plastic started to melt, thus holding the cables in place so that when the trigger is pulled, the two cables touch and complete the circuit. Crude but effective and it means I am not forced to buy yet another cheap tool to replace it.

This experience set me thinking about a much improved version. Are you listening Bosch?

The ergonomics are excellent so the whole tool just needs to be made with slightly better materials.

The battery has a good capacity but if the tool was a little more powerful it wouldn’t hurt. It would be helpful if it could charge faster.

The light could be much brighter.

It needs to have a reversible bit, one side cross head and the other Phillips. It also needs a home for a second bit with smaller heads. These two bits would cover most screwing situations.

So come on Bosch, you could have a real winning tool on your hands with an improved version of this tool. I know you can do it. I have used Bosch tools for years and the Professional range is totally reliable and powerful so get on with it.

One thought on “What a tool. The Bosch electric screwdriver”