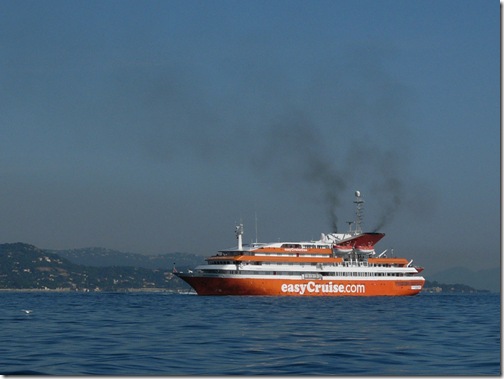 Alan Villiers was an extraordinary man who was witness to the end of an amazing era. The era of the Tall Ships. Aware that this ancient trade and all that hard earned experience learned over centuries was dying out, he wrote book after book and even made some impressive films about his experiences aboard these awesome ocean nomads.

The conclusion that this learned man came to well over fifty years ago was that the square rigged sailing ship of the early 20th century was perfectly evolved to cope with the colossal distances it had to travel and the often brutal conditions it had to meet.

One can easily see why these ships would die out 100 years ago with the oncoming of steam, but the situation is very different today. Could a tall ship be an economic viability in the 21st century? I believe it could. Let me tell you why.

The biggest problem today would be crew. To have to pay 40 odd crew for nigh on a year just wouldn’t be possible, even allowing for the savings made by not having or using an engine. If the crew did not need paying, only feeding, then suddenly it might be possible to turn a profit transporting certain goods around the world.

These free crew would come from many places. It costs the Government a lot of money to put people in prison. For offenders of relatively minor crime could be given a choice. Five years at Her Majesty’s pleasure or one year sailing around Cape Horn delivering goods without polluting. All the countries of the world could participate. It would be a hard life but a fair one. The discipline is hard on a ship but it has to be. This is character building stuff.

Sailing around the world on a sailing ship can only be positive. How can anyone hope to reform or become a better person in jail? Only out on the open sea where reality lurks can you truly find what you are made of.

Since the idea of sailing around the World is very romantic and adventurous, I suspect that there will be no shortage of willing victims. Did I say victims? I meant crew. A long line of adventurers who want to sail the Southern Ocean. For just their food and board and perhaps a small wage, enough to buy small rations above and beyond that provided.

There would also be a huge amount of people wanting to be aboard simply to gain valuable experience. Having held a position of responsibility aboard a square rigger will look superb on your CV. It wasn’t so long ago that sail training like this was compulsory if you wanted to enter the merchant service or navy in many countries. The trouble was, it was too expensive to run ships like this just for training purposes. It didn’t mean that there were not many willing sailors who would love the opportunity to gain a unique experience in a real ship, there just weren’t any ships.

Perhaps berths could even be sold. After all this is a unique experience. It could be billed as eco tourism after all. If this idea is to work, an open mind about exploiting every earning opportunity must be held.

Obviously the ship would need a tough core crew, but any ship needs a basic crew anyway so there is no extra expense here.

Having solved the problem of crew, a very large part of any ship, lets talk about the ship herself. Villiers was of the opinion that the last of the Cape Horners was about as well evolved as any ship could be that had to make those voyages. I propose a four or five masted steel ship, capable of carrying thousands of tons of grain/wood/coal or whatever non urgent produce she can find. She would be modeled on the most successful and consistently fast ships of old with few concessions to modernity.

If she is to be truly effective, she must not have a propulsion engine. The props would cause drag and slow her down under sail. The space needed for an engine and it’s fuel would eat up hold space. Engines are expensive and need careful maintenance and skilled persons to keep them working. They are noisy and they pollute. As she will spend much of her life in mid ocean and only occasionally come to port where tugs will meet her and moor her it seems illogical to fit an engine. The ships of old never had engines. They made their global voyages purely under sail with zero pollution.

Why no engine? Is this not a safety issue? I don’t believe so. A ship like this does not fight the wind, it is blown by it, often going what looks like far out of it’s way simply to keep a favourable wind. It cannot sail like a dinghy so a wise skipper never goes anywhere near a lee shore. Most of the ship’s life is spent mid ocean where there is very little to hit since the steamers all take more direct routes to their destinations and there is almost always some kind of wind blowing. The last Cape Horners managed over 7 knots over the duration of an entire voyage, which might have been 3 or 4 months long. A very impressive figure.

Without an engine, there will be no temptation to motor, you will HAVE to use the weather that you have but imagine what more modern equipment and better weather forecasting could do for a square rigger today. It’s entirely possible and very likely that this figure of 7 knots could be much increased.

The ship, is called The Conservation as it a great name for a pioneering ship. For every trip she does around the world, that’s one less stinky ship burning tons of fuel everyday. This is a bonus and if it could be made to pay, a wonderful lesson to others. So long as the bills are paid, and the ship gets her share it would work. 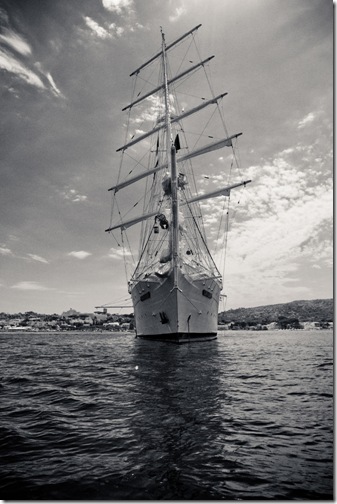 There are masses of benefits. The government would save money by not putting young offenders in prison. Society will benefit because these young people will re enter society better people more aware of the fact that their actions have an effect on other people, while the whole experience is likely to have a profoundly humbling effect on the offender. Statistically the Government can’t lose as in effect there will be less people in jail which can only look good.

With the biggest part of the expenditure, namely crew, covered, the ship stands a chance of turning a profit delivering non urgent goods around the planet without polluting in the process.

We all know that global warming is affecting us all and we are losing our valuable bio diversity every day. But what can be done? How do we as an ever growing population balance the need for economic growth with sustainability? This is one suggestion.

Since the ship will be often at sea it will be in a great position to report on wildlife such as whales and albatross spotted in rarely visited areas which can be used to allow us to gain a better understanding of our planet, so that we might be in a better position to protect it.

Noise pollution of the oceans is a big deal if you are a whale. Sailing doesn’t make noise. No damage is done by a sailing ships passing. Year after year, decade after decade and mile after endless mile, the sailing ship passes silently and beautifully doing something useful.

Many other scientific observations can be made concerning the weather, sea currents, and temperatures etc that will allow us to build up a greater understanding of the great oceans. They cover 70% of our planet but we still know so little.

How will this be funded initially? What better a project for offsetting carbon, it could be partly funded by the polluters of the world. Partly funded by government, partly funded by shipping companies who have a responsibility to consume less. Perhaps even partly sponsored by the public. Sails could carry logos as advertising as this ship is sure to attract huge media attention.

Governments will make favourable concessions on goods imported by sail. Cheaper docking rates will be made available for sailing ships. With good will and assistance globally this is highly feasible.

Obviously building a strong ship like this will be shockingly costly initially, although without engines, not so much more than a comparable motor ship. If a profit can be turned then the ship will ultimately pay for herself. A ship like this with enough crew to properly take care of it might have a life span longer than half a century which gives plenty of time for the ship to pay herself back. I have no doubt that, cleverly handled, the ship could earn her cost back in less than a decade. Profits could be used to build more such ships. Individual ship owners in the past were able to build up large fleets of ships like this.

Surely, in the long term this idea has great potential for reducing pollution and carbon emissions, not to mention the educational effect and the increase of our scientific knowledge. Villiers and others felt sure that the sailing square rigger couldn’t really be improved on. This is perhaps true, of the basic hull shape and rigging set up but just by using more modern materials the efficiency of such ships is bound to be improved and keep on improving as long as there are sailors to sail them and goods to be delivered.

There was a famous square rigger skipper called Jarvis who was always trying to improve his ships, making them faster and safer he even took out patents for many of his inventions. His view was that the sailing ship in some form or another need not go, that there was work for her to do, and that the wind was too good a source of motive power (and the science of it’s use too well developed) just to be thrown away. I couldn’t agree more.

Today we are faced with the greatest challenge ever witnessed by the planet. With over six billion people already and an expected total of nine billion in just 40 years time, we HAVE to find ways to live in a more sustainable fashion. We can do it. We just need the will. It’s so easy to get depressed and overwhelmed by the scale of the problem but in fact it is not complicated. We know what the problem is and how to fix it, that’s already something.

We must use our ‘collective brain’ to find solutions. There is no one single answer. There are millions of ways to move forward and we must all be part of that. Here is a project that has far reaching and very positive repercussions. The wind is free. Is it so crazy to imagine a fleet of well manned square rigged ships trundling silently around the planet delivering goods? In this day and age I don’t think so.

We have put men on the moon, yet for this project it’s just a question of collating the long gathered information, making a few choices, being brave and then making it work. It is nothing that has not been done before, the technology is simple yet efficient. What better ambassador for a country, than a proud ship that is part of a global quest for more ethical, sustainable, logical, exciting, soul lifting and non polluting way of trading.

Remember: THE WIND IS FREE!

Update: This article informs us that many shipping companies are reducing the speed of their ships to reduce costs. Has there ever been a better time for a sailing cargo ship revival?

Update: July 2015 Looks like we need this now more than ever: