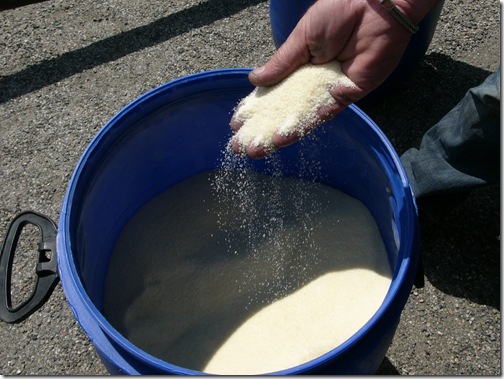 One of the things I like best about the boating world are the interesting people that one meets, it seems to attract individual, confident and clever people. Enter Thierry Schrive a Frenchman who has spent the last three years developing a unique and highly effective way of stripping old paint from boat bottoms. In the past removing old antifouling has been fraught with difficulty, cost and mess. Thierry’s system solves all the age old paint stripping problems in one fell swoop.

His company is called BioBoat and his distinctive stripy van contains all that is needed for on site removal of old coatings using spaghetti! Well, it’s not exactly spaghetti but that’s not far from the truth. Instead of sand which can be very aggressive and damaging to gelcoat and other surfaces, his system uses baked wheat flour which is ground down into small crumbs of varying sizes. This makes his system very eco friendly but Thierry has taken it one step further. His system incorporates a vacuum hose that collects all of the used pasta and old paint. He even recycles the pasta and can use it up to eight times before it is too fine to remove paint.

Boat yards can only welcome this new technique since there is no mess at all, Thierry doesn’t need to wear goggles or a mask as he is working it’s so clean. The resultant stripped surface simply needs a light sanding to key up the surface for whatever treatment you have in mind. The system is so gentle that the substrake is not in any way damaged. So how much does this wonder treatment cost? A mere 50€ plus VAT per square metre. When one considers the alternatives it starts to look like very good value indeed.

I called BioBoat in to strip a Mini Transat yacht so it could have Coppercoat applied. Thierry’s van is very well equipped and can be plugged into a shore supply if there is one or if not, it can use it’s own diesel generator. Inside the van are steel hoppers and pipes and all sorts of valves. The pasta is put into the system by simply sucking it up from the containers. It is all very clever and logical. Thierry can strip pretty much the entire boat right up to the waterline with millimetre accuracy in just a few hours. As far as I can see, there are no down sides at all. At last here is a way of safely stripping off any number of layers of old antifouling from any kind of boat, cheaply, cleanly and effectively.

This system is so clever that Thierry can even strip old lacquer from carbon masts and spars without damaging the surface at all. As far as I know Thierry’s system is the only  one that can strip the finish from carbon without causing damage. Suffice to say, Thierry is constantly busy. 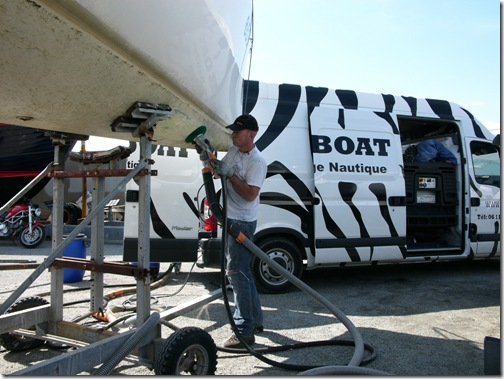 Thierry is based in the south of France but has van, will travel. He told me that if he had a few boats to do in the UK he would be happy to make the trip in order to do the work but what he is really after are people who are interested in buying into a BioBoat Franchise, both in the UK and the rest of Europe. It has taken Thierry a few years to perfect the technique and to gain awareness but now he is busy constantly. It looks like BioBoat is likely to be a big success. www.bioboat.fr