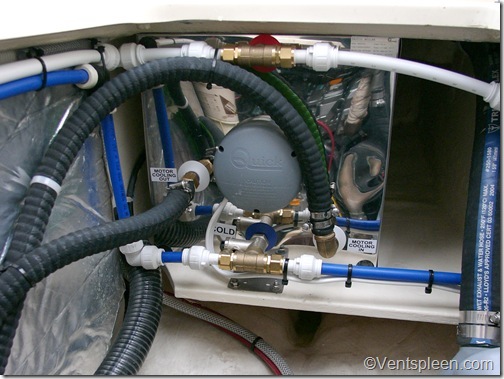 Very pleased with how well the Quick BXS fits in the engine room but soon to be disappointed with it as it started leaking.

Like most things one buys for a boat, choosing the right water heater is far from easy. There is a huge choice of heaters out there in all shapes and sizes, made from a variety of materials with varying cost.

The first consideration was where to put the heater. In the Dana 24 the position is obvious. There is a large empty space behind the engine which couldn’t really be used for much else. Of course having extra weight right at the end of a boat is not ideal but sometimes a compromise must be struck.

The second most important consideration is how the boiler is built. I wanted a stainless steel construction for longevity. Many heaters have stainless exteriors but the actual water tank within is often made from enamelled steel or even aluminium which didn’t seem very clever to me.

Now that I knew the size of the heater and what it should be made of I was able to trawl through the many choices to find the most suitable. In fact, if you’re looking for a square stainless heater, there is very little choice as most heaters are round.

Finally I decided on the Quick BXS heater. It was made with a 316 stainless tank with a 304 stainless exterior. In order to fit the tank I had to make a shelf in the engine bay which I glassed  in. The heater was a snug fit and that was good because it meant it couldn’t move. A 40 kilo (when full) tank needs to be well mounted!

The BXS works well. It has a small 500 watt element that heats the water when connected to the shore supply and a calorifier for heating the water using the engine which is very efficient and we can have very hot water in just 20 minutes. It takes longer with the element but that never matters as it is always plugged in.

All in all I was very pleased with the way the BXS performed. It heated water quickly and kept it warm for about 24 hours. However it has not been reliable. It wasn’t long before the drain tap started dripping. This did not affect the performance of the unit but it did mean that we were losing valuable water and the pump would come on from time to time.

Having changed the tap, a not easy job as it meant draining and dismantling the water pipes, the heater sprung a leak again. This time it was more serious. The welding around where the element went had failed. It appears that the centre piece was ‘spot’ welded on in one action and obviously the machine was poorly adjusted and didn’t have the penetration required to properly weld the two surfaces together.

I contacted Quick in Italy where they are made and did not receive a reply, despite numerous attempts. So I contacted Quick in the USA where customer service is generally better than in Europe. However I was to be disappointed. If I wanted my tank repaired or replaced I had to send it back to them. This meant that we would be without a water system for some time and the cost to ship the unit back would have been very expensive.

In the end I asked a welder friend to weld the area properly instead. I received an email telling me that if I did that it would void the guarantee. Since the two years was almost up anyway I went ahead. My friend has been welding for 30 years and really knows his stuff. He confirmed what I had suspected, the welding did not have enough penetration. He then TIG welded all around the area and since then I have had no further trouble with this part of the tank. 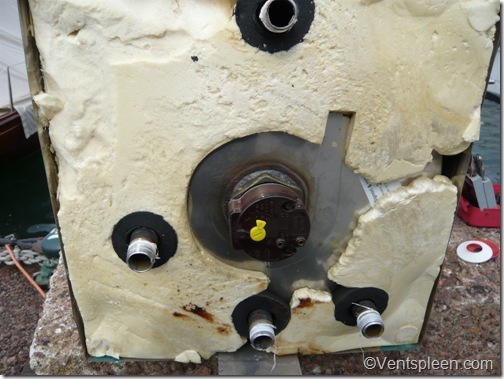 This picture shows the welded up area around the heater element and the very poor insulation. Note how thin it is where the tank nearly touches the outer box.

Then after another few years the heater started leaking again and so it had to come out yet again. As you can imagine removing a heavy water tank from a small difficult to access space is not easy. On inspection I found that one of the welds on one of the pipes had a hole in it. 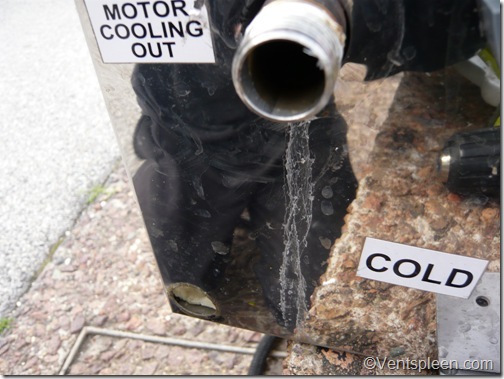 Leaking yet again. Tell tale water marks down the front show that water has been getting out.

My welder friend confirmed that the welding had been poorly done. This can be seen by the fact that the weld seems to sit on the surface rather than be sunken into it as good welding should be. He welded it up for me.

I wrote to Quick to complain as I did not think it normal that a tank should fail at the welds, not once but twice. They replied this time only to tell me that the cause was galvanic action. This was before they had even seen the tank. It’s obviously their standard ‘it’s your fault’ clause which they use. Fair enough, the unit was out of guarantee so I did not expect much help but I was disappointed in their attitude. 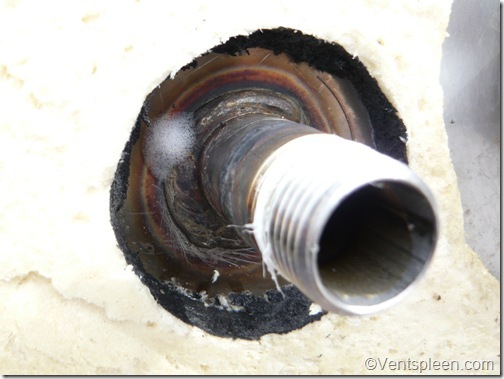 Finding the leak using soapy water. Here you can see the small white bubbles indicating a leak. It was only a tiny hole but the tank is part of a pressurised system so that represents quite a leak. Note also the lack of penetration in the welding. Note how it seems to ‘sit’ on the surface rather than be melted into it.

It is true that boats can have all sorts of stray electrical currents aboard and it’s true that the tank could have been attacked by galvanic action however I saw no signs of any of this when I took the tank out. All the brass fittings which screw on to the pipes were in perfect condition. If there had been any galvanic action there would have been obvious corrosion showing and on closer inspection you would expect to see a pinkness showing where the zinc in the brass had been eroded away. The fittings were all in as new condition.

Further more the zincs on the hull on the boat are very slow to erode, a further indication that there are no electrical issues on my boat. Further more, the Dana has excellent electrics done to a very high standard and the boat is just 7 years old so I rule out galvanic action as a reason why the tank started leaking on two separate occasions. The reason as far as I can see is due to poor manufacturing. It is possible that the stainless steel was not properly cleaned before welding or was not of the highest quality but in any case I had problems and they were not due to galvanic action.

So having had a very disappointing experience with this heater and the company who make them I decided that I had lost faith with it and wanted it off the boat. I would instead buy the best heater I could find and fit that instead which is what I should have done in the first place! And so began a long search on-line for water heaters. I discovered that Indel make water heaters and since we have one of their fridges aboard, I can certainly vouch for their quality.

The Indel range of heaters are by far the most expensive heaters on the market and that’s because unlike other manufacturers their units are built to a spec and not to a price. I chose the Slim 15 which is a round unit with a 15 litre capacity, that’s almost half as small as the BXS but in theory it should still give us as much hot water.

The Slim 15 has a thermostatically controlled output which means you can run the tank at a far greater temperature and thus get more hot water water for showering. The heating element is shaped so that it drops down to the bottom of the tank so that all the water is heated and not just the top half.

When I drained the BXS to remove it, the first (lower) half of the water that came out was cold, eventually it ran hot but it does mean that you’re only heating half of the water which means you’re carrying around all that weight of water for nothing. The heater element in the BXS is straight and does not heat the water in the bottom of the tank.

Then there’s the insulation. The Slim 15 has foam all around it where as the BXS is basically a round tank in a square box so in fact it has almost no insulation at the points where the tank touches the box. The difference between the two tanks is extraordinary. If you place a hand on the Slim 15 it is cool to the touch, even though the water within is scolding hot. The BXS was always hot to the touch indicating very poor insulating qualities.

The bottom line is that you get what you pay for. The Slim 15 was twice as expensive as the Quick BXS but it is better insulated, has a thermostatically controlled output so that the tank water can be heated to a much higher level which makes the unit much more efficient. It may have a much smaller capacity than the BXS but it heats all the water in the tank not just half of it. It also comes with a 5 year guarantee which is a far better indication of the confidence a company has in their product than anything else.

Yes the Quick BXS was not expensive considering it is made of stainless but it is poorly made and not as efficient as it should be. Their after sales service is disappointing preferring to blame the customer than even consider for a moment that there might actually be  a problem with one of their products. If you take into account the extra costs involved in having to replace the tap unit and paying for the welding twice then this BXS heater has worked out very expensive indeed. Not to mention the time and hassle involved in removing the tank to be worked on.

When will I learn that it just doesn’t pay to buy anything but the very best for a boat. It never pays going for the cheaper option as it always costs more in the long run. So now I have had to buy a better and more expensive heater which makes the Quick BXS even more expensive! If I had only bought the best heater in the first place I would have saved a lot of time and money!

There’s another argument for buying the best equipment and that is when you have a problem you are much more likely to be taken seriously by the company that are proud of their product than one who is just out to make money.

Conclusion: Poorly made, poorly designed, poor insulation and poor after sales service. You pays your money and you takes your choice. I for one will never buy another ‘Quick’ product for my boat.