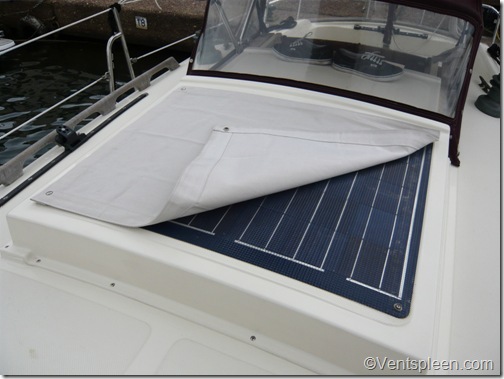 ‘What a stupid idea, you must be mad!’ I hear you cry. But is it? Maybe the cover is made from a new space age light diffusing material that helps to maximise energy consumption on overcast days. No? Ok, I made that up. The cover is made from Sunbrella marine fabric which stops the light so well that the panel can’t produce any electricity so why do I cover my panel?

The sun might be good for powering the fridge when we are off sailing but apart from that it is very destructive and will slowly destroy almost anything left out in it for long enough. Since we spend over half a year in a marina and have access to mains power there is no need for a solar panel during this time.

So rather than leaving the panel to get dirty and damaged by the elements we made a cover for it. The logic is clear. Supposedly the solar panel has an expected life expectancy of 26 years. By covering it up for 2/3rds of it’s life it has a life expectancy of 78 years.

Despite the maker’s claims I will be amazed if the panel is still working after a quarter of a century but by covering it when not in use it certainly stands a chance. A friend had a Solara panel like mine but smaller. It lasted just 4 years, so even using this pessimistic figure I can still hope for 12 years of use.

No one knows how long it might last but if we as humans are to consume, we have a responsibility to take care of the things we have bought and make them last as long as possible. I’m constantly amazed and not a little depressed by the waste and thoughtlessness that I see.

Some friends had an old dishwasher that stopped working. It seemed like there was no water getting in. That would suggest to me a blockage somewhere, maybe a dirty filter or a pump had failed. By the time I had got there they had already spent a small fortune on a new machine.

Their argument was that it was old and a new one would be more efficient. I am not sure about this. More efficient for sure but does the energy saved come close to what was used in the manufacture and shipping of their new machine? When we disconnected the old machine we saw that the inlet was clogged up with calcium. I am convinced that all it needed was a clean. On closer inspection I did find a broken and corroded micro switch.

An hours work, some elbow grease and a 3 Euro switch could probably have kept it going for at least a few more years. If I had a house and wanted a dishwasher I would have been delighted to take it off their hands and use it. Instead it went to the dump. No doubt it will be recycled using still more energy. I can’t help feeling that it was doing better as a dishwasher.

Waste is a terrible thing and to leave my solar panel out in the sun when I am not using it is also a waste, the plastics that seal it in and focus the light will go cloudy quicker, water may get in and shorten its life. The cover was made from an offcut of material and a few poppers. It cost almost nothing.

On the other hand solar panels are NOT cheap. That one cost about £600 so if I can extend its life by 67% with very little cost or effort then I will! 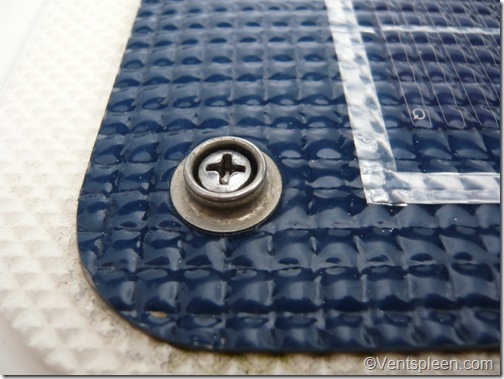 The cover is fitted to the panel without making any new holes. The head of the screw was filed down a little to allow it to fit inside the male part of the popper. Neat and simple.

One thought on “Protective sun cover for a solar panel”