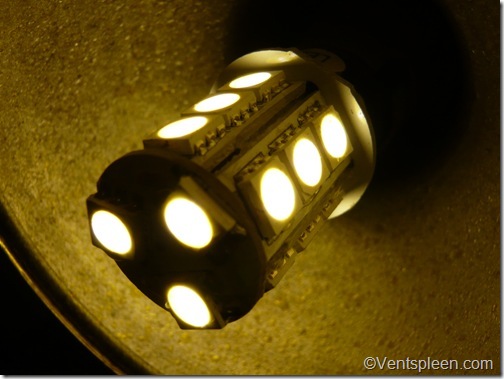 Ever since I have had a boat I have been excited about the idea of using LED lights because of the tiny amount of power that they use. When you live on a boat the most trivial things can become important. Ordinary light bulbs are effective and bright but they don’t last long, consume a lot of power and get so hot that they damage the lamp fittings and are a potential fire hazard.

Do the maths. One 20 watt incandescent bulb takes almost 2 amp/hrs of energy out of my house battery. You don’t need to understand electricity to realise that if my battery has a capacity of 100 amp/hrs, and in reality only half of that can be used so we are down to a capacity of 50 amp/hrs, in just 100 hours one small light bulb would flatten the house battery!

When you then consider the need for navigation lights, normally on all night when sailing and further consider that one bulb is rarely enough to adequately light a yacht interior and it’s easy to see how in just a few hours, normal light bulbs can take it out of even a big battery.

What this means in the real world is that the boat’s engine will need to run more often to charge the depleted batteries. The more you run an engine, the more it wears out and the sooner it needs servicing. Being able to reduce the power that even a humble light bulb takes is very helpful and also saves you money and helps to reduce pollution.

At about the turn of this century, LED bulbs started to make an appearance but those early attempts were not up to much. On the plus side, they did not get very hot and they did massively reduce power consumption but that was because they were not even as bright as a candle.

It was much worse though, not being very bright was only part of it. They were expensive too, didn’t last as long as the maker’s claimed, shed a ‘cold’ and unfriendly light and had a very narrow beam so were only really good for very direct lighting needs. It’s not surprising that there were not many takers.

By about 2005 things were looking up, there were more and more companies on the Internet making all sorts of claims. The most common was that the bulbs would last 50,000 hours. When you do the maths, that works out to be about 6 years of continuous use. The bulbs were still a bit cold but they were starting to be bright enough to consider using them to light my boat.

My first foray into the LED bulb world was through a company called Dr Led. I bought a few through West Marine when I was in the States. They were not cheap and frankly they were not very good. Their beam was narrow, they were cold and not as bright as I had hoped. They were OK for reading with when on night watch as the narrow beam and feeble output did not disturb your off watch mate in the opposite bunk.

Sadly after just a few months I thought I was going blind but it turned out that the bulbs were fading. I had a spare new bulb I had not used before and did a test using the light meter on my camera. The old bulbs were two whole stops down on the new one. I do not know how one is supposed to calculate this but they looked about half as bright. This was only after a few months. Soon after some of the bulbs in the cluster died and eventually there were only a few working and they became as good as useless.

I wrote to Dr Led to complain and they admitted that they had had a few problems but they now had a better bulb that was made in America that was guaranteed to only lose half it’s brightness after 50,000 hours. This obviously made a mockery of their previous unconditional claim of 50,000 hours clearly printed on the packaging.

They were willing to sell me the new bulbs at a discount but I refused. If they wanted me to test them for free, that was one thing, but after the poor performance of their previous bulbs I had no interest in spending any more of my hard earned cash on more of the same. Not impressed. Suffice to say I have not bought from Dr Led since. West Marine finally reimbursed me for the bulbs.

The next company I tried was called Super Bright LEDs. At the time their website was pretty simple as they did not have a very big choice of bulbs. What they did have was a small square LED with 9 of the latest type of high power bulbs on it. The colour was ‘warm’ and the spread quite wide. They were much cheaper than the Dr Led versions at about $20 each. I bought a few and was impressed. They were not bad at all but still not as bright as I had hoped.

They didn’t get hot though and they were so thin that I was able to double them up in the overhead lights to get more output. This worked quite well but they were still not anywhere near as bright as the original 20 watt halogen bulbs that were fitted. Still, we could live with them as they did actually light up the boat and took very little power.

The problem was that at the time they didn’t really offer any ‘bulb’ types that could be simply swapped for normal bulbs in our other lights and the ones they did were not very good so I modified some of the overhead bulbs to work. It didn’t look very pretty but they were not bad.

Then recently I decided to have another look at Super Bright LEDs site and see if there was anything better. Their site is now rather confusing as the selection of possible bulbs is mind boggling and this is not helped by LED bulb’s brightness being described by Lumens. This is all very well but what does it mean? It is a shame that they do not tell you what the equivalent brightness would be in normal watts.

Instead you have to trawl through their exhaustive range of bulbs to work out which is best. This took me some time I can tell you! I enlisted help from Super Bright LEDs and in fact their range is so confusing that even their customer support got it wrong. Finally I worked out what bulb was the brightest. It has 15 leds and a Lumens of 160 or about double that of the 9 bulb versions I had before. This is the brightest they make so I bought a few at less than $20 a pop.

Then I discovered that they now made double contact bulbs with the same kind of LED so I bought a few of those too. They only have 110 Lumens but are very small and neat. Again, about $20.

So how do they compare to incandescent bulbs? In brightness, I would have to say that the 15 bulb overhead bulbs are about as bright as a 15 watt bulb where as the 18 bulb dual contact bulb replacements are as bright as a 10 watt bulb. It would be nice if they were brighter but they consume so little power that it’s no problem to put as many on as you like.

To give you some idea of just how much less power they consume, when we had 20 watt halogens in the 5 overheads and 20 watt bulbs in the 4 reading lamps we could suck a staggering 15 amp/hrs out of the batteries, now with all 9 LED lights on, it’s not as bright but we only draw 1.5 amp/hrs which is nothing at all.

So all in all I am very happy with the new lighting aboard. The latest bulbs are very warm, almost too warm. They have a nice spread of about 120 degrees but best of all they do not get hot and they consume very little power. 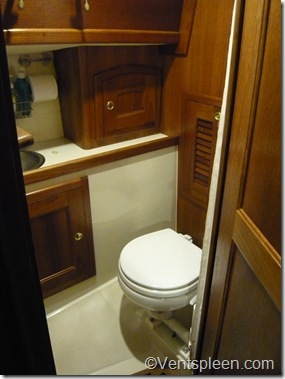 I know it’s an awful picture but this was taken at night, hand held! using a Panasonic Lumix camera and NO flash. This demonstrates nicely just how well just one 15 bulb LED illuminates the head.

For your information, here are the G4 overhead bulbs

For more information, contact Superbrightleds.com An excellent company in my experience. I have bought twice and each time the bulbs arrived very quickly and was exactly what I ordered. For some reason I am never charged import duty or VAT even though the bulbs come from the States. Bonus.

We used the 9 bulb versions for almost two years with very little fade so these newer ones should last for many years.

Also Superbrightleds claim that the bulbs are environmentally friendly. I don’t quite know how they work that out, perhaps it is when compared to other types?

One thought on “LED lighting comes of age”