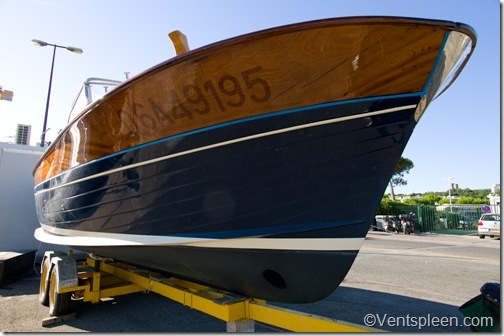 A most satisfying result. Deep gloss and no brush lines even on a vertical surface which is the hardest to do. Even the most critical fellow varnishers were impressed. Leica M9, Summilux 21

For years I have been aware of Le Tonkinois varnish but somehow never got around to trying it. Finally after 20 years I decided to give it a go and here’s what I found out:

Mostly I use single part Epifanes varnish as it has always remained consistent in quality unlike some other brands I could mention. Epifanes never lets you down. You know exactly what to expect from it. In the two decades I have been using it it hasn’t changed a bit. Even the tin is still the same! But one has to wonder if there is a better product out there, or if not better, then perhaps different. 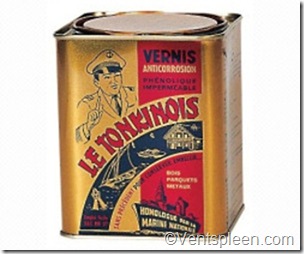 Does exactly what it says on the can. The official varnish of the French Navy and NO unnatural additives!

For some reason paint companies love to put additives in their paints and varnishes. Products that help it flow or dry faster or whatever. The problem with this is that these additives tend to be rather noxious so it comes as a pleasant surprise to learn that Le Tonkinois contains NO nasty products or additives at all.

It is based on an ancient Chinese recipe that is hundreds of years old and is basically made from Tung oil and linseed oil and that is it. The linseed oil is heat treated and the proteins are removed so it will not go black when applied to wood. It is harmless and natural which is more than can be said for all other varnishes on the market. 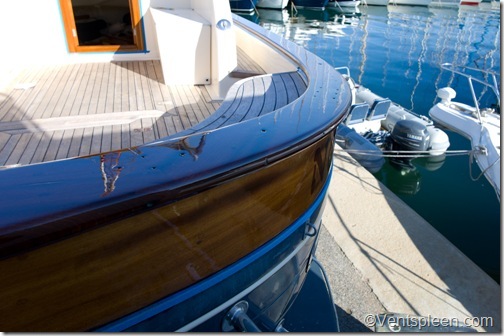 These pictures don’t really do the varnish justice but it does give an idea of how shiny it is.

It does not need thinning, you just slap it on. They claim that there are no brush lines when you use it and it does not need sanding between coats. It can be used on metal to stop corrosion and with just a simple additive you can make it progressively satin in appearance. It dries to touch in 2 hours and is properly dry after 8 hours so it compares nicely to normal varnish.

It just gets better though. because there are no thinners to evaporate you are left with a thicker coat of varnish than normal varnish and a one litre tin will cover an amazing 20 square metres which is 50% more than a one litre tin of Epifanes. Since it costs about the same, Le Tonkinois is actually the better value product by far.

So, enough waffling, how does it actually work? Bear in mind I have done a ridiculous amount of varnishing over the last couple of decades and much of that was done on classic yachts where the quality of finish is crucial so I feel that I am in a good position to comment.

Varnishing a classic yacht requires anality from the start to the finish. Every aspect of the process has been refined over the years, from the kind of sand paper I use and the brush that I prefer. More than that, it’s about environment, temperature, weather, the weather to come, who is on the boat, what time of day, the age of the varnish tin, how much it is thinned, the kind of varnish, the quality of the tack rag and the thinners used. How clean the brush is and the surrounding area, the quality of the masking tape used and how well it is applied etc. When you are varnishing at this level EVERY tiny detail is crucial.

Even the sequence the varnish is applied is important. In fact I think I could write a book on varnishing it’s that involved and detailed! But anyway, back to Le Tonkinois, no doubt you are waiting to hear how it compares to other varnishes. I will be comparing it to Epifanes one part varnish as that is the standard bench mark for varnishing. 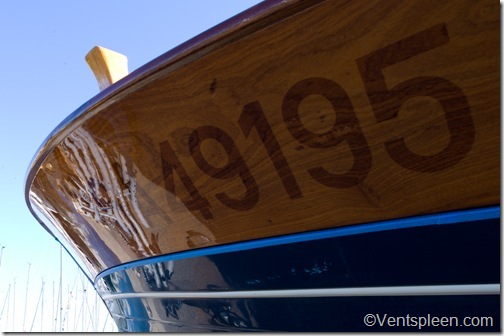 Deep gloss and no brush lines. I really like this product.

Straight from the tin without thinning, Le Tonkinois is very nice to use. It smells a little but it smells natural. It is quite dark in colour compared to Epifanes. It has a brown colour to it although it is not at all opaque. I used an Ox hair and White China bristle Purdy brush which is simply the best varnish brush money can buy. I have tried them all and this is by far the best. It can carry more varnish yet is supple and so fine that it doesn’t leave brush lines. It is strange to use at first but you soon get used to it.

They claim that you do not have to sand between coats but if you are after a great finish then usually the trick is to wait 24 hours and sand between every coat. This is what all professional varnishers do when using Epifanes. On the French site for Le Tonkinois they say that you should sand every other coat of you are after the best finish. I think this is right so there are even more savings in time and money to be had from using it.

It keeps a wet edge longer than Epifanes and I noticed that I was able to go back where I had missed a bit even some time later whereas with Epifanes once you have passed you can’t go back, it will always look terrible. It’s true about not leaving brush lines. They really do just disappear. I’m sure that a lot is to do with the quality of my brush but even so I get the impression that Le Tonkinois really does flow out better than Epifanes. I found that it tacked up after a couple of hours which is a bit longer than Epifanes. I did not notice any more dust in the finish than usual but then I try to keep the work area as dust free as possible in any case and when after the best finish, I always varnish first thing in the morning when it’s not too hot, not windy and the insects have not yet appeared.

At this point I should add that this test was made in May in the Med where it’s warm and sunny. It might well give completely different results in cooler climes. Le Tonkinois also make a new version called No1 which does have some thinners in it but if you can get away without using thinners, what could be better?

It doesn’t seem that you can apply it as thickly as you can with Epifanes but I think this is misleading as there are no thinners to evaporate with Le Tonkinois so the finished dried coat is thicker which is what is ultimately important after all.

It can be over coated after a minimum of 24 hours but if you want to sand it, you are better waiting 48 hours for it to dry a little harder. It can be sanded after 24 hours but it still feels somewhat tacky and although the sand paper doesn’t actually clog up it does seem to drag and thus take longer. After 2 days however it sanded very nicely indeed with 320 grit 3M sandpaper. They say you should use water and wet and dry paper but maybe that is only if you want to sand after just 24 hours.

I was very impressed with the finish that I achieved after just a few coats and when you further consider that I had not sanded between every coat it was even more impressive. After 5 coats I only lightly sanded the surface to remove the odd dead insect and dust and yet the 6th coat looked fabulous.

After 8 coats I was left with a lovely deep finish that everyone commented on. No runs, sags or holidays and NO brush lines at all. Really quite something. This kind of finish is achievable with Epifanes of course but it was so much easier with le Tonkinois.

There are a few issues of course. There’s always a catch! As I said, it takes a couple of days to dry enough to easily dry sand it and it is hard to find here in France which is ironic since it is a French product and has been around for ever! It is also the official varnish of the French Navy. It needs to be at a temperature of at least 20 degrees C to allow it to flow well without thinning and it cannot be used in direct sunlight if it is very hot or the oils can bubble to the surface. (this might only apply to bare wood as I have not had any such issues yet).

The varnish will last 5 years un opened but less than one year once opened. This isn’t really a problem as the solution is to simply store the tin upside down.

Conclusion: A very nice to use, safe and non toxic, natural product that smells good, won’t give you a head ache (even when used in a confined space) and does not contain solvents and leaves a very nice high gloss finish even without rubbing down between every coat.

As yet I cannot comment on how long it will last or how long it keeps its gloss but from what I have read it doesn’t crack or peel unlike Epifanes and this could be a very good thing on a yacht. One of the problems with Epifanes is that it is brittle and can crack. Once it has cracked it takes some effort to repair it. In theory Le Tonkinois might lose it’s gloss but this is probably a good time to recoat anyway. Whether it lasts as long outdoors in the Med sun as any other one part varnish I can’t say yet although in a recent Classic Boat magazine test it did as well as, if not slightly better than Epifanes. I will be updating this post from time to time to let you know.

As far as I am concerned this is a great product. It is so nice to be able to use a non toxic product for a change and especially one that actually works!