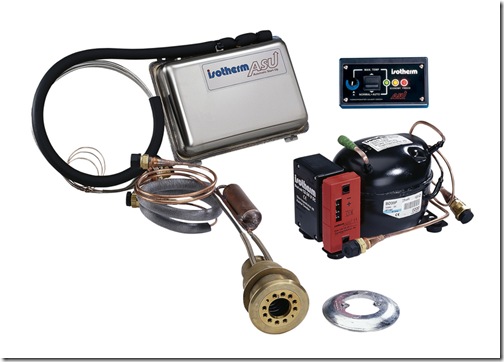 A fridge on a boat is not a luxury, it’s a necessity, at least here in the Med, when it’s often over 30 degrees in the summer. Before we had a fridge we used to throw away a lot of food that just went off before we could eat it. Apart from the fact that I hate wasting anything it was costing us dearly. Also not having a fridge meant more frequent trips to the shops.

The fridge we chose in the end was the Isotherm SP ASU 3251 which is good for fridges with a capacity of up to 125 litres. At £1300 it was not cheap but it solves many of the common issues that most fridges have. Most fridges share the same Danfoss compressor, where they differ is in the type of cold plate they use and the way they cool the compressor.

The Isotherm uses a holding plate to cool the fridge. This is basically a stainless box filled with a special liquid that freezes solid, much like those blue plastic gel packs that you put in the freezer, then transfer to a cool box. The advantage of a holding plate is that it stays cold for very much longer than a normal evaporator plate. It’s a bit like having a big lump of ice in the fridge. Holding plate systems are much more expensive but they are much more efficient.

Most fridges use a fan to cool the compressor but this is not an efficient way to do things. The heat has to go somewhere which can limit where the compressor can be placed. The problem is getting rid of the heat. Most systems vent the heat into the cabin of the boat which is the last thing you want in the summer. If the fan can’t get rid of the heat the fridge will never be running as efficiently as it can be. Also the ambient temperature is high in the summer reducing the efficiency still further. What this means in real terms is that the compressor has to run more often and that uses power.

Compressors can use a lot of power. 6 amps an hour would be a typical consumption so obviously the less time the compressor runs the more efficient the system will be. Isotherm get around this problem by using a special seacock which uses sea water to cool the compressor. However there are no pumps, just the slight movement of the boat is sufficient.

Basically the standard seacock for the galley sink outlet is replaced with the special Isotherm one so you do not have to make any more holes in the hull although you will probably have to enlarge the hole as the seacock has a diameter of 60mm. Inside the seacock is a copper tube which has a large cooling area. The best bit about this system is there is no fan using power or filling your cabin with heat. And because it uses seawater to cool it is more efficient as seawater is rarely more than the ambient temperature in the summer, often less. It still works even if the seacock is closed or the sink is blocked up with potato peelings!

This feature makes the fridge much more efficient but Isotherm take it much further with their ASU (Auto start up) system. This is a very clever system that monitors battery voltage. When the ASU senses more than 12.5 volts it starts the compressor which runs at full power and freezes down the holding plate. It’s clever because if you have more than 12.5 volts it means that you are either branched to shore power and the battery charger is plugged in or you are running the engine.

When the volts drop below 12.5 volts, the unit goes into economy mode and the compressor runs at about half power. It runs just enough to keep the holding plate frozen but takes very little power to do it. What all this means is that our fridge uses just 10 amp/hrs a day (24hrs) and that is very little for a fridge, perhaps half as much power as a conventional system. Isotherm themselves quote 0.35 amp/hrs on average and I would say that this is about right. We fitted one solar panel on deck and this produces enough power to run the fridge so we rarely have to run the engine to charge batteries even with the fridge on 24/7.

The system is completely automatic. The fridge has a small control box that you place in a convenient location. It has a switch so you can turn it off, set it to auto or if you want, to manual if for some reason you want to control the temperature yourself. There are three lights which tell you exactly what is happening.

Because the compressor is not cooled by a fan, it can be placed almost anywhere, even in the smallest of spaces, something that wouldn’t be possible with a fan which needs a good volume of air to work in. There’s less heat and less noise. I installed the compressor under the sink on a shelf I made and it is so quiet that we rarely hear it. When we are at anchor and not on shore power, the compressor runs at half speed so that tends to make it even quieter still.

Only in the quietest anchorages can we sometimes hear the compressor kick in but the sound is never intrusive. We have forgotten that the fridge is there and have completely taken it for granted. The compressor makes more noise when running at full speed but even then it is very quiet and mounted on super soft rubber. We only notice the noise when it switches off and we realise that the slight noise we could hear was the fridge.

Fitting the fridge was straightforward. It comes pre charged with gas and the connectors open up only when they are tightened. There’s plenty of length on the copper pipes and electric cables. This is a very well thought out bit of kit.

Some might say that £1300 for a fridge is a lot of money but lets look a bit closer. I would say that it paid for itself in less than a year simply by the savings we made by not having to throw away so much food. Then consider that you will make less trips to the shops which not only saves a lot of time but also fuel for the car.

Then consider that the Isotherm SP ASU system uses so much less power than other more conventional fridge systems that you will run the boat’s engine much less than you would otherwise have to. This brings savings in fuel and of course if you’re running your engine you’ll have to service it more often and that takes time and money. You’ll also be needlessly polluting the planet. But also consider that the worst thing you can do to a diesel engine is run it at low revs with no load on it and suddenly the fridge doesn’t seem expensive at all. Consider also the pleasure of having a really cold drink on a hot day. This alone would be worth it.

I maintain that buying any fridge system other than the Isotherm SP ASU will be a false economy. It is expensive yes but the savings that you will make will soon pay the difference. It’s a maintenance free system. In the four years that ours has been running I have had to do NOTHING to it. It even defrosts itself every ten days automatically. It has not been switched off once in all that time!

There’s one thing I haven’t yet mentioned and that is the quality of the ice box and the insulation around it. I was fortunate that Pacific Seacraft went to a lot of effort to create a very well insulated ice box on the Dana. For maximum efficiency you need at least 4” of insulation all around the box for a fridge with a capacity of 100 litres. The bigger the fridge, the thicker the insulation needs to be. Also a top loading fridge is a must. It’s worth considering the fact that the fuller the fridge the more efficient it is too. It does not pay to skimp on the insulation of your ice box as it will have a big effect on the overall efficiency of the system.

When we’re sailing in the summer and the sea water temperature is about 25 degrees C and the fridge is running in economy (Auto) mode I reckon that the compressor comes on at half speed for about ten minutes or so every hour. The system will still work when the boat is on the hard although it uses more power. However if you’re on the hard, you probably have shore power and thus a battery charger so this is not a problem.

The system is so efficient that we can even make ice cubes simply by leaving them resting against the holding plate. Isotherm recommend that you place a perspex plate a few inches away from the holding plate. This creates a small freezer section but still allows the fridge to remain cool. We have not bothered to do this but at least the option is there if we ever do decide we want a freezer.

Conclusion: Best £1300 I ever spent. Fit and forget. Super efficient. Cold drinks in the summer and even ice cubes. Almost silent. Very little heat from the compressor. Brilliant. We wonder how we ever lived without it. Because we waste less food and shop less we are doing less damage to our planet. Highly recommended.