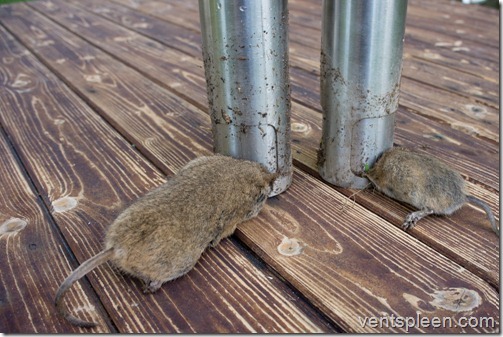 For thirty years I lived on a boat. There are many things that can make your life difficult or annoying when you live on a boat but voles and moles ain’t one of them! It wasn’t until I bought a house that I discovered that these lovely furry creatures were not only making a shocking mess of the property but were also responsible for the death of fruit trees and veggies in the patch. We don’t mind sharing with the creatures but there is a limit.

And so I embarked on a quest to find a humane way to rid my home of these ‘pests’. I scoured the internet for ways to discourage them. I tried everything I heard and then some but to no avail. I heard that they don’t like caster oil so I bought some and sprayed it everywhere. No difference. I tried the same with various essential oils. I pissed down their burrows and I put plastic bottles on poles. If anything there were even more tunnels and mounds and holes.

It was thanks to a chat with a neighbour, also a former sailor, that I finally discovered the real way to get rid of voles and moles. It really works, that I can assure you. No need to pour petrol down their holes and ignite it. No need to stuff a car exhaust down there. No need for poisons either.

It all comes down to a trap made in Switzerland with a price tag to match. Perhaps 70€ seems pricey to you. It certainly does to me but honestly they could probably have charged double and I would still have tried them! When you consider the cost of the damage they do and the time I have wasted because of them 70€ starts to look cheap.

Cut a long story short, I bought a couple. Beautifully made and engineered in stainless with a super fine and delicate trigger mechanism. Those vole and moles didn’t stand a chance! They are designed to be put inside the tunnel. Just poke around with a pointy stick near a new hole until you feel it, cut out a trap sized tube of earth and place the trap in the hole and arm it. No bait, no poison. If a creature pokes its nose in the hole it goes straight to destination f**ked every time. Instantly. Thanks to the way the trap works it gets the creature on the back of the neck. There is no suffering with this trap which is essential. I don’t want to hurt the creatures, I just want them to go and destroy things somewhere else.

I set the traps for the first time and within 20 minutes they had both caught something. One had caught a rataupier (a kind of rat like looks like a mole) and one a vole. (see pic) I was amazed. Within just a few days I had killed nearly 20 and the garden is now free of digging pests. It’s true.

However the caveat is that I do not believe that this trap will work on its own. These creatures are too clever and too well adapted to living underground. What I had been doing, without even really knowing why was crushing every tunnel I found. I had been doing it for months. Some 30 wheel barrow loads of soil had already been used to fill the crushed tunnels level.

We had a wet winter so the tunnels could be felt underfoot as you walked across the garden. A kind of hollow sponginess that told you a tunnel was there. And so every time I found one I crushed it down and I believe it’s this in conjunction with the traps which has firstly removed them but then kept them away and here’s why…

From the research I did when I first realised we had a problem I discovered that voles have a ridiculously short gestation period and one pair of them could produce 4000 offspring in one year! And that when the pups are old enough to leave the nest they are chased away never to return. They have to find their own new territory (sadly in my garden!) and I also discovered that they all seem to share the tunnels.

It makes sense to use the existing tunnels. I can understand a mole digging, look at it. Built for the task. The other smaller creatures can dig but no where near as well as the mole. If they had sense of course they would use existing tunnels so by crushing the tunnels and removing the moles and voles and mice and anything else that used them they would probably not return.

There is also a time to do this. The tunnels must be crushed and the pests removed while the weather is cold and wet when it is easy to crush the tunnels and before they start multiplying. My garden is dry now as summer takes hold and the traps remain set. Nothing is caught because there is nothing to be caught. It’s not like they have realised there are traps here and are avoiding them. There is no new activity anywhere.

It’s possible that when summer is over and the ground is easier to dig in again that they will return but if they do I feel pretty confident that I can put them off thinking they will find a happy forever home here in my garden. Perhaps if we had cats there might be less of them but I doubt it somehow as my friend nearby has a cat and his garden is full of silent destroyers of carrots and other root crops. We prefer the birds which is why we have no cat. Actually that’s not true, we have two Topcats! It’s funny name for a trap but perhaps that is what they meant. After all a cat is a highly evolved and very efficient destroyer of mice.

Whatever. After years of being depressed at watching our hard work get eaten invisibly we really do now have a garden with only the usual pests, greenfly, slugs, snails, Colorado beetle, earwigs, ants, caterpillars, mites etc. It sure was simpler living on a boat….

The toaster that doesn’t toast. The Dualit Lite