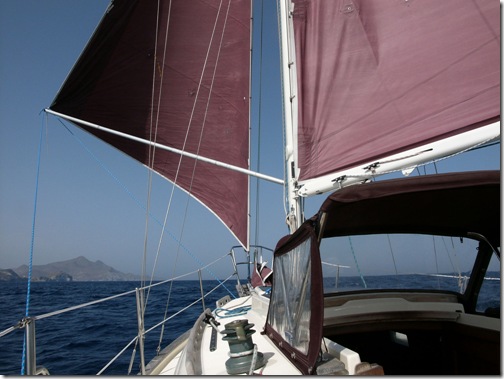 Forespar make a range of aluminium whisker poles. I chose a 2” dia. version in three parts with a total extended length of 200” (5 m) and a collapsed length of 80” (2 m) (model no: ADJ-15-DL) On each end is a self latching spring fitting. Apparently it is strong enough for a 28 foot boat to use it on the working jib in med to heavy airs.

When not in use it lives clamped to the stanchions. It is fairly unobtrusive here but rather exposed to the weather. The pole is quite light which is helpful when using or stowing. The end fittings are made of a type of plastic so they do not damage the boat at all. The end fittings have spectra lines to open the jaws and to attach topping lifts if required. It cost 350€.

The twist mechanism is simple but it is not very reliable. Often the pole will collapse during use. I complained to Forespar who eventually sent me a new pole. Sadly that was barely better than the original one. The system works by having a rubber wheel with a slightly offset axel so that when you twist the pole, it acts like a cam and locks the pole. Eventually I was forced to drill a hole in the extended pole and fit a self tapping screw to stop the pole collapsing.

I had to mark the poles at their maximum extension so I would not pull the poles too far apart. Unbelievably, the only thing stopping the poles coming apart is a piece of dyno tape stuck onto the inside of the pole. Not surprisingly, these don’t stay in place long.

The pole is not very strong and it can bend alarmingly. I haven’t snapped it in half yet but if I was not careful I could. It’s a shame because I would like to leave it up poling out the jib but instead I have to drop the jib and use the staysail instead or risk breaking the pole even though it’s not very windy. My jib is only 150 sq feet and my boat just 24 feet long but even still, this pole is not up to it.

Even collapsing the pole is difficult. The inner pole collapses easily as there is a small hole to let air escape (if not it would be like a giant bicycle pump with your finger over one end!) but the smallest dia. pole is hard to collapse as there is no way for the air to escape except around the rubber wheel inside the pole which is too snug a fit.

Another annoying fault is that the jaw on the widest end of the pole cannot be opened if the inner pole is fully inserted. This never used to happen on the old pole so I assume it has something to do the new plastic jaws but in any case I find this a poor oversight.

I removed one end while investigating why the jaw wouldn’t open and discovered that the fitting was much too small in the tube and was made wider with masking tape! This is very poor, because in time the fitting will move, the three screw slots will enlarge and eventually there will be play in the jaws. It’s just poor engineering and there’s no excuse for it. 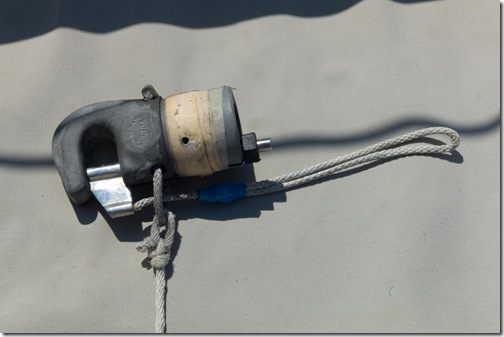 I wrote to Forespar who assured me that this was a perfectly fine way to build a spar, common engineering practice, I was told. Honestly, who do they think they are fooling? Sound engineering practice would have been to make the end fit the pole snugly like it does at the other end of the pole. Failing that, then a wrap of some kind of hard plastic that covered all of the jaw end that fits inside the pole would have been ok. But no, Forespar use a cheap and ordinary white masking tape which can compress and they only wrapped a part of the end fitting.

Since they managed to make one end fit well, I can only assume that this is either a design fault or bad manufacturing. If the pole worked well without collapsing I would forgive all these faults but it just doesn’t work well enough to be trusted and it’s not man enough even for my small jib.

Conclusion: Nice idea, small when collapsed but annoying to use, hard to collapse when stowing but easy to collapse when using it to pole out a sail. Not strong enough for a 24 foot boat despite the claims and poorly engineered with masking tape. Thin piece of dyno tape is all that stops the poles coming apart. All in all a big disappointment. 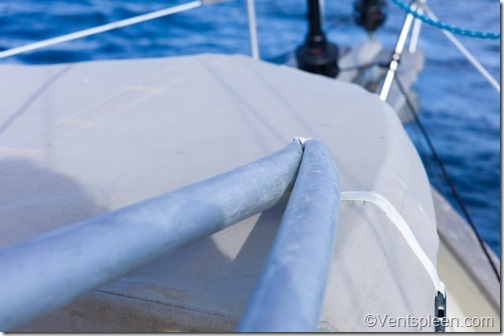 Ooops. It had to happen one day. In just a light wind a slight sea the pole finally broke. It simply folded itself in half.

Well, the day finally arrived. The pole snapped in two. At the time I was running down wind with about 12 – 14 knots of true wind and a slight sea. One minute all was well then the next the pole had folded in half. No drama, no fuss at all. It was very undramatic.

However I do owe Forespar an apology. They did say that the masking tape was fine and that it was unlikely that the screw holes would ever enlarge in time. They were right. The pole broke long before it ever became an issue!