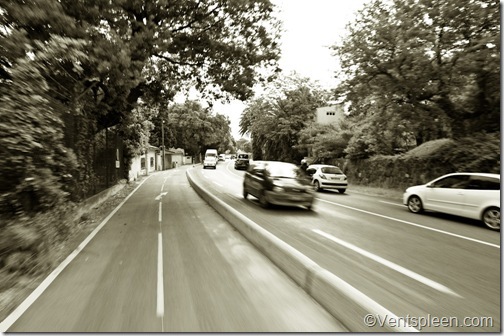 In the spring I often find myself working in St Tropez. It’s about 6 kms from the boat and there is a cycle lane all the way now. They built it a few years ago. It was certainly needed. Before the cycle lane you would have had to have been mad to want to go to St Tropez on a bicycle. I used to use a scooter as taking the car is out of the question. Apart from appalling traffic the costs of parking are shocking. The car park in St Tropez makes 3,000,000 Euros a year I am told.

Frankly now that the cycle lane is there I can’t understand why anyone would drive there. The weather is generally good and there are no steep hills to deal with. The clincher is that on most days riding a bicycle is quicker by far. When will people give up their cars? It seems idiotic to me as I ride past an endless line of practically stationary traffic on my beloved and quite brilliant Brompton folding bike. 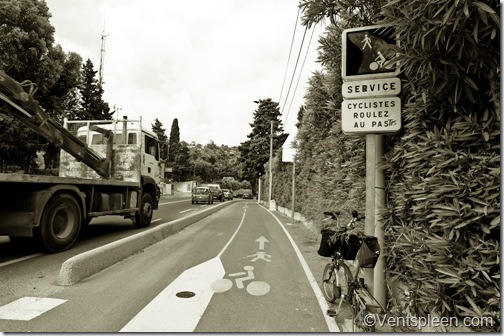 The cycle lane is pretty good but not without it’s issues. It’s separated from the traffic by a concrete curb about a foot high which worries me a bit. If you fell off your bike onto that you’d know all about it! But at least it keeps the traffic out of the cycle lane so it’s just one of those things.

The biggest problem are the pedestrians who also use it. After all it is for sharing but they are a dozy bunch for the most part and they seem so utterly surprised and not a little indignant when you pass them, if they have left you enough room to pass that is. Every day I surprise someone who is dawdling along and paying no attention or worse has earphones in and is oblivious to the world around them. 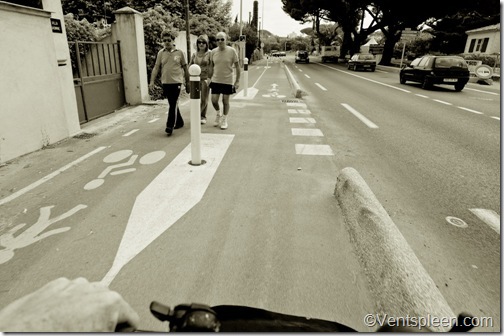 Bikes and people must share. These pedestrians seem aware of bicycles but this is a rare situation. Mostly they are oblivious and always surprised to see a bike! Leica M9 21mm Summilux.

The solution to this was to fit a loud horn to warn them that I am coming. They still seem surprised to see a bicycle however. I don’t know what can be done about this. I don’t mind sharing the route with pedestrians and I am courteous and patient with them but I do not feel that it is reciprocated. It would be nice if we could all have our own path to use but there’s not much chance of that.

Not every cyclist uses the path and that could be because it’s often in need of sweeping. Dead leaves, dust and broken glass can often be found along with puddles of standing water where the path was badly made. The worst aspect are the drains which some berk in their wisdom placed in line with the path so if you have small narrow wheels on your bicycle, beware! 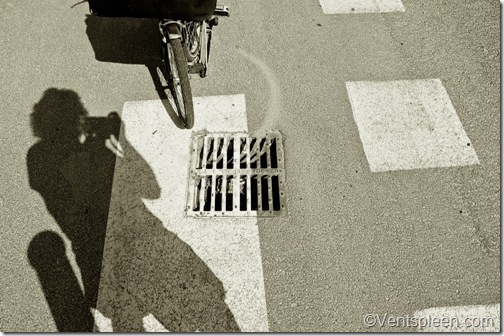 Not helpful. Drains facing the wrong way. Since they are square it would be no hardship to turn them through 90 degrees! Leica M9, 21mm Summilux.

Despite these few issues the cycle lane is fabulous and I am happy to use it. I am constantly amazed how few bikes use it. On a typical day in May I might see only half a dozen other bikes. It’s a big shame that it is not used more because for every bike on the path it’s another car off the road.

Using the path every day you become aware of one thing; the stupidity and lazyness of people in their cars. Are they even aware that they are in traffic? They don’t seem to mind, everyone seems very calm and resigned. When driving, I can’t stand traffic and it makes me feel like a freak and an idiot. What am I doing sitting in this metal box polluting the environment and hardly moving? 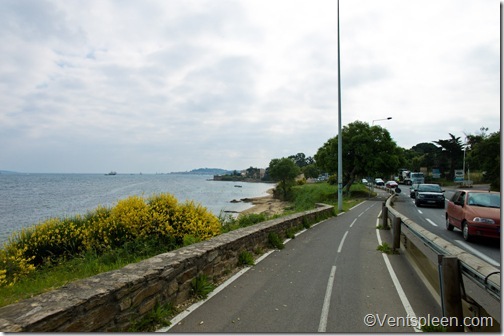 Lovely views of the bay of St Tropez from the cycle path. Leica M9, 21mm Summilux.

What is so wrong with cycling? Would people really rather sit in their car not moving than get some exercise and fresh air AND get to their destination faster? Never mind the pollution. It is very sad that the council have provided this cycle lane in an effort to reduce traffic yet people still prefer to take the car. Bikes are brilliant. When I get where I am going, there is no worries about parking, no fees to pay. If I was to park in St Tropez, I might still have a good ten minute walk to get into town from the car park. Cars are supposed to save time are they not? 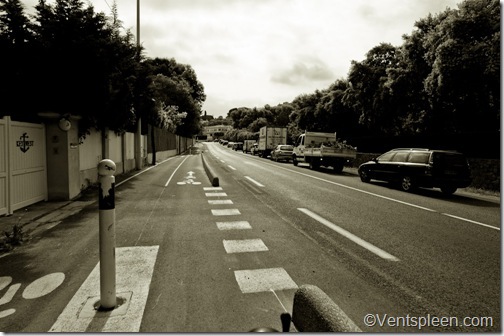 Riding in to St Tropez in the morning. Note the stationary traffic on the way in. Most days are like this. It’s much quicker by bike. Leica M9, 21mm Summilux.

I can do this 6 kms in about 15 minutes and often I pass EVERY car. That same journey in a car can take an hour or more. Why do people do it? I just can’t work it out. If there was no cycle lane I could understand it but there is. Who was it who said that they had hope for humanity every time they saw an adult riding a bicycle. I feel that way too. Every time I see another cyclist I think; here is someone who ‘gets it’ and prefers to ride for free without polluting. Good for them.

Although the cycle lane is not used as much as it could be I feel that I am setting an example. The more people that use the cycle lane, the more those idiot car drivers would realise that there IS an alternative. It’s a no brainer! No cost. Keeps you fit. Faster. No pollution. No parking. And on top of that it’s much more pleasant on a bicycle. The views of the bay from the cycle path are lovely. The only real down side of the cycle lane is the sheer noise from the traffic. Of course it’s better when it’s stationary but there is a never ending stream of noisy scooters constantly overtaking. 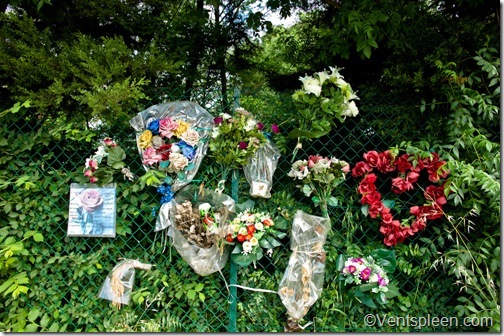 Sadly road side memorials like this are far too common. A bicycle is a far safer way to get to St Tropez than a scooter. Leica M9, 21 Summilux.

The scooter is the way that most people beat the traffic but they drive like idiots and every week there is an accident on this road. People are so impatient and overtake even if the traffic is moving at a reasonable pace. A scooter is better for the environment than a car for sure but a bicycle is better and a hell of a lot safer too!

If you are thinking of going to St Tropez in the summer, do your self a favour and hire a bicycle and ride in. You’ll have a much better experience. There are plenty of people renting bikes but perhaps the most interesting is one called Beach Kulture who rent the funkiest types of bikes and scooters. They can be found on Facebook and are located at Marines de Cogolin.

I have made my self a T Shirt that I wear sometimes. On the back in big bold letters it says:

Zero Pollution & Plus vite que vous! (zero pollution and faster than you!)