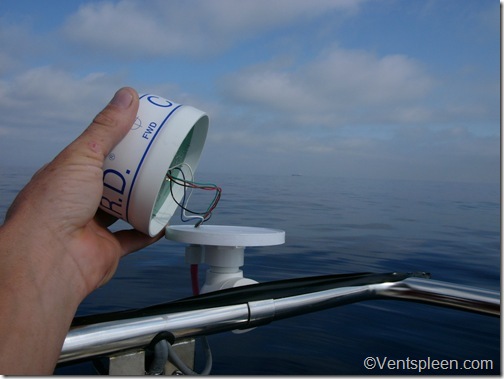 Mid Atlantic the top of the C.A.R.D. fell off! I glued it back on.

When you are crossing an Ocean it helps to see and  be seen. There are a lot of big boats out there but you cannot rely on them seeing you. It has always been my belief that it’s better to see them first. Enter the C.A.R.D. radar detector.

There is a small display unit and an antenna that is mounted outside the boat. The display is not waterproof so must be mounted inside the boat. It has 4 lines of red leds that light up depending on where the radar signal is coming from and the stronger the signal, the more leds will light up.

In practice it’s impossible to say how far away a ship might be because it depends on how powerful their radar is as well as the distance. What you can say is from what direction the signal is coming from and that is useful.

There is an alarm that sounds every time the leds light which has two levels, annoying or really annoying but at least you can turn the alarm off although I grant you that’s not very helpful if you forgot to switch it back on again and fall asleep.

The sensitivity can be adjusted infinitely so you can tune out weak signals or set it to pick up everything. The unit is quite small and wiring it up was straight forward. It’s 6 years old now and still works fine.

The antenna must be placed outside and not too high either or you’ll pick up radar from 20 miles away which probably isn’t of much interest to a small yacht. A few weeks after I had installed it, the top of the antenna fell off so I had to glue it back on. Luckily I don’t think any moisture got in and it’s been fine since though one week into a transat I was somewhat perturbed to see it!

The antenna is designed to mount to a standard 1” aerial mount which in turn is clamped to the pushpit at the rear of the boat where it seems the most out of the way. The antenna must be positioned facing forwards and this is clearly marked on the unit. 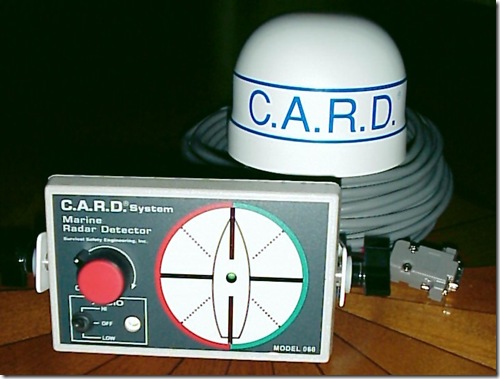 In practice, the C.A.R.D. works very well at sea and it picked up all the boats we could see and even some that we couldn’t. In some respects a radar would be the better option than a C.A.R.D, but they cost a lot more and more importantly take a huge amount of valuable power. The C.A.R.D. takes a tiny amount and can easily be left on 24/7.

These days I would probably rather have an AIS system but I doubt I would remove the C.A.R.D. as it does function well and is an added tool in a small boat’s anti collision arsenal because as clever as the AIS system is, only large boats are required by law to have it and that still leaves a lot of smaller boats to hit! Of course neither system will work if there are small boats out there without AIS or radar but that is why it is also important to keep a good visual lookout at all times.

The biggest problem with the C.A.R.D. is that it is only really of use to you well offshore where there are not too many boats using radar. In congested waters it is simply annoying and beeps almost constantly.

When I needed it most, in fog near Gibraltar it was useless because of the monitoring radar that is used to keep an eye on traffic movements in this area. It was so strong that it obliterated every other weak signal with one massive one. It was most disconcerting to be able to hear big container ships around me but to not know where they were! I suspect that this will be a problem in most TSS areas which is a shame.

Not too expensive and does work well well offshore. A useful tool for small offshore sailing boats but not much good in crowded areas or TSS areas due to the overpowering nature of the monitoring radars used.

Easy to determine the direction of the radar but not so easy the distance.

Requires an external antenna (supplied) to be fitted outside.

Display unit not waterproof so must be placed inside.

Here is the link for the manual with contact details However I have read on many forums that the company no longer exists. If this is the case don’t fret, there is a French equivalent called the Mer Veille which can be found here 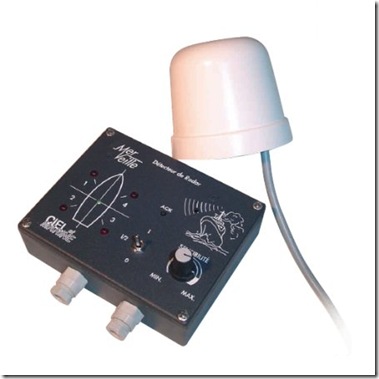 The Mer Veille. The French equivalent to the C.A.R.D.