Bill King. One of life’s characters. 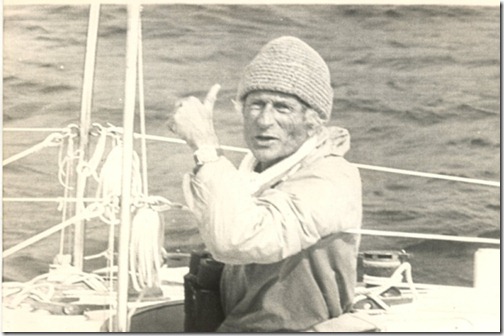 The sailing world has many extraordinary characters in it’s long history. It’s my experience that the world of sailing is responsible for more ‘interesting characters’ than any other and Bill King was an excellent example. He passed away recently at the age of 102. It seems amazing that he lived so long when one considers how tough parts of his life were. He was a submarine captain throughout the entire duration of WWII. One can only imagine the constant stress and harsh living conditions.

When he retired from the military he decided to sail around the world alone to, as he put it, ‘pull myself together mentally’. At the time Bill was thinking about the trip the Sunday Times Newspaper announced a round the world solo yacht race so Bill became one of the entrants. He didn’t make it around the world that time, being dismasted in rough seas of the south of Africa but he did eventually.

This video is from the film Deep Water which is actually about Donald Crowhurst one of the other entrants in the ‘Golden Globe’ yacht race and if you have not seen it I would highly recommend it, not just for the story of Crowhurst but for the many extra clips and interviews that come with it from the likes of Robin Knox Johnston and Bernard Moitessier. I will say no more just let you see for yourselves. This interview with Bill King was made when he was 96. What a fabulous character, and funny too. Enjoy.

And here is a great article from the Scotsman

‘Remember, if anything goes wrong in your life, it’s probably your own fault’

One thought on “Bill King. One of life’s characters.”