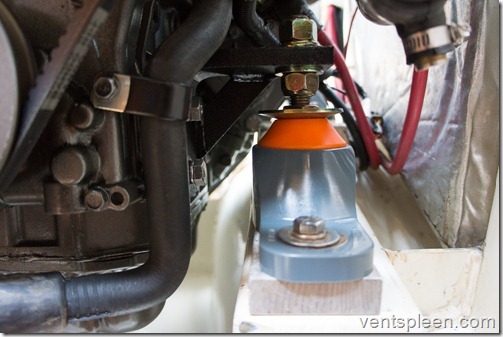 The new Polyflex Yanmar engine mounts fitted to a 3YM 20

The Australians lead the way in Polymer technology. The reason why they are so good at it is because the extreme heat in their country destroys rubber in no time at all.

The engine mounts that come with the Yanmar are very poor, especially considering the price. Last time I looked they were about £800 for a set. The front mounts have a different elasticity to the rears but otherwise they are the same. They have two issues, asides from the high price. They are painted very badly and soon rust which makes a mess of the engine beds but worse than that, they are only glued on to the base and can simply come off. I had this happen on a 1GM. I could lift the entire engine clean off the mounts. Not very clever or seaworthy.

The advantages of the Polyflex are obvious. Because they have a (mostly) plastic body they do not rust and they also have a fail safe system so even if the polymer is completely destroyed, the engine cannot come off the beds! This is basic really and any marine engine mount should offer this.

They are not cheap. I paid about £600 for a set of 4. There’s only one mount stiffness so no more having to worry about using the right mount in the right place. They claim to be a direct replacement but this is not entirely true as the bases are much thicker and in my case (naturally) I had to order longer bolts in order to bolt them down to the beds. It’s worth bearing this in mind if you do decide to buy some.

Fitting them was the usual fight in a tight access area but eventually I managed to get them in. When I first started the engine I was very disappointed as there was more vibration than before. At tickover the ropes and rigging wobble. It never did this with the Yanmar mounts.

At higher revs it gets better but still has a vibration and it is harsher than before. I wrote to the company who sold them to me and asked what was going on. They demanded measurements from the base to the dished washer at the top but this is almost impossible to do given the poor access I have.

I didn’t get much joy from them so I decided to contact the manufacturer in Australia direct. That didn’t seem to do much good either. The usual, ‘we haven’t had any issues before’. If I had a pound for every time I had heard that I would be so rich. They also suggested that the exhaust could be causing the vibration. It is true that the pipe from the riser has a bend in it and is very short but it is still rubber and besides, I never had this issue with the original mounts.

So it seems that if you want these to work properly then as far as I can understand (although this is only conjecture as I can’t get any answers from Polyflex) then your beds must be perfectly straight, in line and parallel or you’ll have vibration. Despite asking repeatedly I have not been able to find out what the acceptable tolerances are.

As a boat builder of well over two decades I have installed many engines. Not once have I ever come across a perfect set of beds. There is always some inaccuracy. You might have thought that an engine mount would take up some of this slack but it would appear that the Polyflex ones do not. This is very annoying because my beds are not exactly parallel and they are on two levels which doesn’t help.

How accurate do the mounts have to be? I don’t know and Polyflex promise to write and answer my questions but I am still waiting. Meanwhile I am £600 out of pocket and have a boat that vibrates more than before.

So I would say that unless you have engine beds that are absolutely straight, level and parallel and an exhaust with lots of flex and rubber in it, avoid these mounts. I am not impressed with the way they don’t stop vibration and I am not impressed with the company who don’t seem to want to tell me what I would like to know. Why they won’t tell me, I cannot imagine. Perhaps they don’t know. It’s clear they consider their mounts perfect. Therefore I am just another stupid customer who knows nothing. having just spent £600 I had hoped for a slightly better response than this.

It is possible that I will have to shim the mounts to get their angles perfect in all planes. I know that my boat’s engine beds are not perfect because they were made by a human being. Levelling up the beds to get them perfect is a huge amount of work. This is why I want to know what the tolerances are but will any one tell me? No they will not. Very strange.

Of course it is possible that the mounts are all well within tolerance in which case the only explanation for why they vibrate more is that they are not very good at damping vibrations.

Finally I received a patronising reply from Polyflex. If I want to stop my ropes and rigging from oscillating at tickover (apparently the term in Australia is idle) I should increase the revs! What a splendid solution, wish I’d thought of that. There was no definite answer to why the engine vibrates more, just some stuff about a boat being like a guitar. Bottom line: It’s Pacific Seacraft’s fault because they did not make the engine beds completely level and they fitted an engine that was too big.

Unless your beds are absolutely level, straight and parallel you may end up with more vibration, not less. You may need longer bolts as the base of the mounts is thicker than the Yanmar ones.

They might be safer than the cheap Yanmar ones but they do not dampen vibration any better.