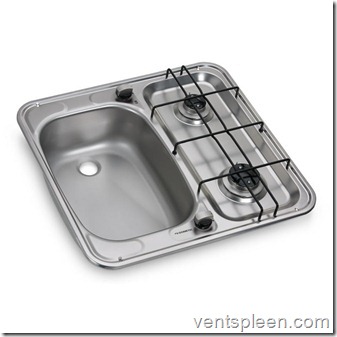 When I was designing the Slidavan I needed a small stove and sink combo. There wasn’t much of a choice for the small size I needed so it was an easy  decision to buy the Dometic HS 2460 sink and two burner hob.

It certainly wasn’t cheap at nearly 300€ especially for what it is, a piece of pressed stainless steel and a couple of fittings. But as there wasn’t really anything else in the size I wanted I decided to buy it anyway. At least it would be good quality and well made for that price.

Right up front I have to say I have rarely been more disappointed in a product or more appalled by a company’s pitiful after sale service. I can’t even say service because there is none. A more shocking example of incompetence would be hard to find.

Clearly Dometic has grown too big and it has become inefficient, the people who work for them obviously don’t care about their work as a consequence. Harsh words? Judge for yourself.

When I unpacked the hob I noticed that on each hob a screw was missing. I searched in the box and found a couple of small pieces of threaded metal. I took the burners apart and what I found was that one of the screws had sheered clean off. There’s only one way this can happen and that is by a poorly trained person who assembled it using way too much force. The screws are tiny. They only need doing up, they don’t have to be tightened so much that they sheer! That’s just shoddy assembly. 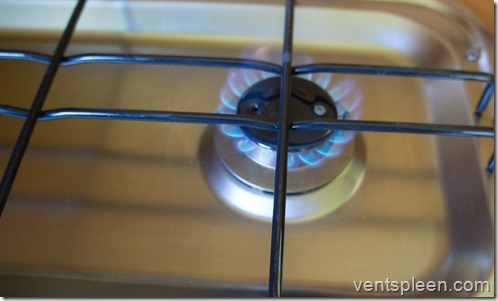 Missing sheered off screws, flame coming out the screw hole and a small of gas. Not very safe really.

The fact that this glaring fault was not noticed by quality control demonstrates a complete lack of care and understanding. The stove is basically unusable as gas escapes from the screw hole and is poorly burnt so there is a smell of unburned gas. Hardly what you want in a small well sealed space. It’s dangerous, there’s no other word for it.

No only that but because the burners are not working correctly the flame has blackened the bottoms of all my pans which means that soot ends up on a work surface and then on my clothes so thanks Dometic. One ham fisted assembler, a blind person on QC and I am put in danger and my pots are black. 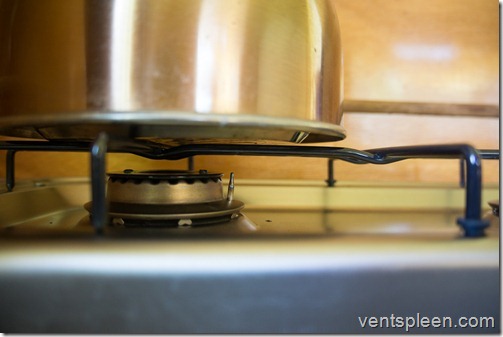 It’s not the bottom of my kettle that’s curved, the grill the pans sit on is laughably bowed and when I move about the caravan they rock on the hob. It is extremely annoying and the sure sign of a product assembled with no care.

This is just the start. One of the most annoying things about this stove is the way the pans and kettle rock on the hob. Why do they rock? They never rocked before on my Force ten stove. They rock because the grill they rest on isn’t even vaguely level. As I move about the caravan the pans rock and it’s extremely annoying. And all because of shoddy design and assembly.

Why is the finish coming off the metal grill already? I’ve only had the thing a month so I can expect that to go rusty in time. 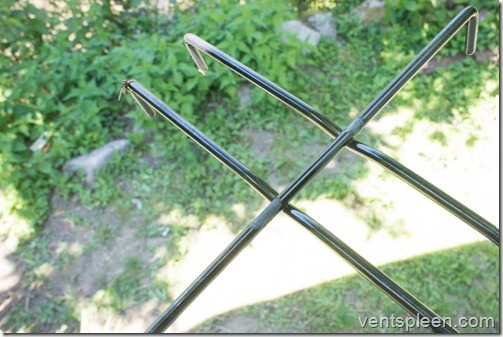 One of the knobs is very stiff and hard to turn, it makes it extremely difficult to regulate the flame.

The rubber grommets fitted to the grill are pointless, or at least the ones on my stove are? They are supposed to pop into the pressed stainless top but some ham fisted (oh did I say ham fisted again?) assembler forced them into the extremely sharp holes and tore the skirt of the grommet so it cannot locate. Absolutely pointless. 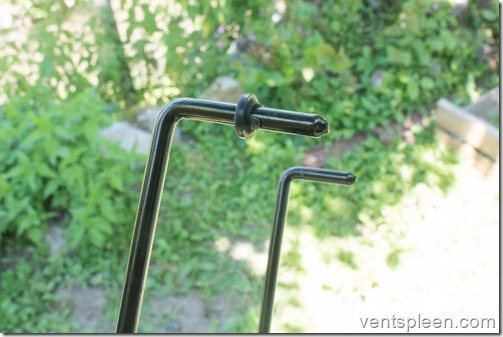 I fail to see the point of grommets that don’t fit in their holes. This one has been forced and is now damaged. Pointless.

Shall I mention that the manufacturer’s name printed on the top is already wearing off? I couldn’t care less if they have their name on my stove but it’s just another indication that this stove has been built down to a price. It’s cheap. It’s all cheap. I know caravan stuff needs to be light but come on Dometic, it has to last a few years too. 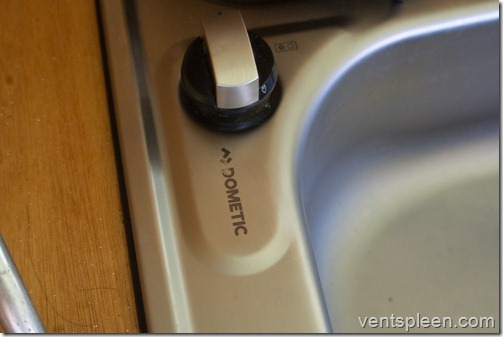 A few weeks old and already the name is wearing off. I couldn’t care less about that but it is yet more proof of how poorly made this stove is.

So generally I’d have to say I am pretty disappointed with this stove and as I have to look at and live with these faults every day I am annoyed every day. 300€ is a lot for a piece of stainless with some knobs on it.

But what is worse than all this by far is the dreadful service I have (not) had from Dometic. Like most companies who do not want their customers contacting them they do not supply an email address nor a phone number just a stupid form (I hate forms) to fill out.

So I duly filled out the form and wrote my message. Did I hear anything back? Did I f***. Nothing annoys me more than a company who gladly takes your money and then ignores you. It’s just completely unacceptable. So I wrote again. What more can I do? This time I was annoyed and I actually did eventually get a reply.

Of course, no word saying they were sorry for the hassle, just a short rude email asking where I am. 1 out 10 so far. I replied and then heard nothing. Eventually I got a reply saying that my message had gone to Mexico hence the delay. I cannot say I am surprised. Dometic have clearly got so big that they are inefficiency personified. Absolutely pathetic. That was the last I heard.

A month has passed and I am no nearer to getting any kind of intelligent response from them. All I wanted was for them to send me two small screws and a couple of grommets. It would have cost them practically nothing and would have kept this customer happy but they couldn’t even manage to find my message or say they were sorry so I don’t hold out any hope at all that I will be able to get the spare parts I need.

It’s a joke. Pure and simple. If you are thinking of buying Dometic and like me you don’t have much choice then check your stove over very carefully before you buy it because if you have a problem you’ll just have to live with it because there’s no way of getting any sense out of Dometic which when you think about it is incredible really since they have no excuse to not receive your email as it’s a form on their own website!!

So as usual in these situations I fixed the thing myself. I found two screws, they don’t screw in because the old part of the screw is snapped off in the casing but the do at least stop the unburned gas from escaping and blowing the roof clean off my caravan. I threw the grommets away as there is no point them being there if they cannot be fixed in place. I cleaned the bottom of my pots and life goes on.

Since Dometic are incapable of helping me, despite taking my money I decided to write this review so that others can make an informed decision before spending their hard earned money on one of these weak, poorly assembled and designed stoves.

The sink is fine but there’s not much to a sink is there?

Completely pathetic. Absolutely inexcusable service (or lack of it) and a shoddy product. Really not much to recommend is there? One of the most disappointing products I have ever bought and without question the WORST after sales service of ANY company I have ever dealt with in over thirty years. Shameful. Absolutely pathetic.