In the footsteps of Cartier Bresson 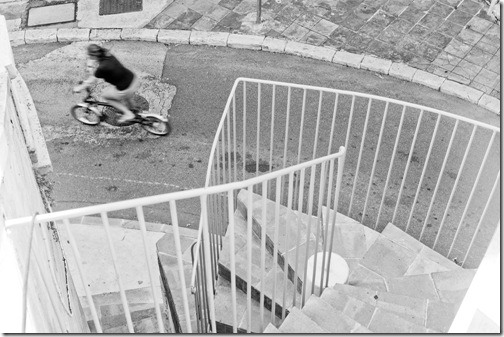 If the photo above seems familiar that’s because it’s a modern interpretation of a very old and famous photograph taken by Henri Cartier Bresson. He was always one of my favourite photographers and a great influence. I loved his style. His pictures spoke of real life. He was able to take the most mundane subjects and turn them into iconic images. The picture below was taken in Hyeres in the south of France in 1932, it’s just a bit of a spiral staircase with a guy on a bike riding past yet it’s brilliant. 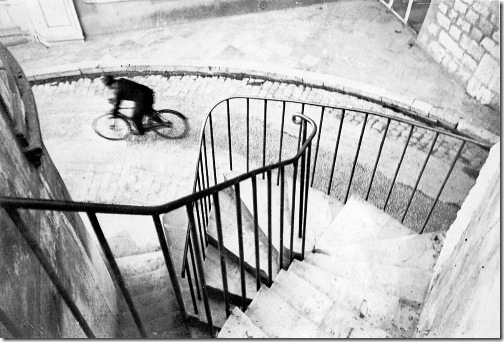 Experts will tell you that he only ever used a 50mm lens, they will also tell you he never set shots up and caught images by chance. Like the famous image of a guy jumping across a puddle. They say that he simply stuck the lens through a hole in the fence and took a picture. It was sheer good luck that there was a bloke in the perfect place at the perfect time. If this is true, then it seems I will never get near to Cartier Bresson as a photographer as I don’t have anywhere near the same degree of luck!

For many years I wanted to see if I could find the place where he took that picture in Hyeres. Soon after I bought the M9 I decided to go and have a look since I was passing anyway. Hyeres is a lovely town and very old indeed. Surprisingly after just an hour wandering, I came across the same spot.

It hasn’t changed dramatically in 80 years. You can still see without any doubt that when I took the picture, I was standing in practically the same spot Cartier Bresson had done all those years ago. I used a 50mm lens and a shutter speed of 60th sec to capture the image but there’s a little less showing in my picture.

I tried the same shot (sans velo) with the 21mm lens but it was way too wide. I almost got away with the 50mm but not quite. It was not possible to stand farther back or higher up. I’ll have to try it again with a 35mm. Perhaps he took the shot with a 35mm and cropped a little afterwards.

All I know is I felt very happy to have found the same spot and to try and replicate it, albeit in a modern way. True, I have used a girl and a folding Brompton bicycle with smaller wheels but the movement is similar. The stairs and rails were not the original ones. I image that they would have been cut down and melted down for use during the war. It is fortunate indeed that they made the new railings at least similar to the originals although it’s a shame they are now white and not black. The tiles have been replaced on the steps and the road has obviously been re-covered but apart from that it’s pretty close and little changed in 80 years.

I dedicate this photo the memory of Henri.

12 thoughts on “In the footsteps of Cartier Bresson”