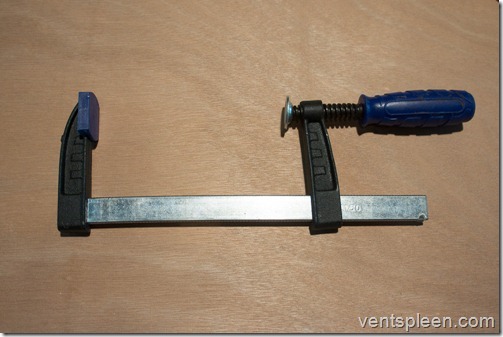 At the end of the day, no matter how bad a clamp is, so long as it can tighten on your work it will do. Maybe there is a lot of play in the thread, maybe the jaws mash up the wood but that is solved with a piece of scrap under it before tightening. But a clamp which will not clamp is as useless as a chocolate fireguard.

In my collection I have over 50 various F clamps, some I have had for decades. they all work. I should say, they all clamp. Some have the round plate missing from the end of the thread, some have terrible play. Some are cheap Chinese and very flimsy but they all tighten.

I needed ten more F clamps for a current job so while I was ordering from a company called FFX in the UK I decided to buy a few more. They did not have a huge range of clamps but I didn’t need anything fancy, just a small clamp which clamped. They offered F clamps from Draper, a well known British company known for making good tools. Or at least that has always been my experience. And so I ordered ten.

The first thing to tell is that half of the clamps would not tighten! Badly machined in the slot which slides up the shaft which is so thin it doesn’t offer much of a surface for the jaw to grip on. In the end I had to file out the slot to try and get them working properly but even that did not help much.

These clamps are cheap and have plastic handles which might be robust but when you consider the damage plastic is doing to the eco system wouldn’t a wood handle be better? The joke is that you can’t put enough pressure on the clamps anyway so why it needs such a strong handle I do not know.

Once I started looking I realised that this product is just awful. there is NOT ONE THING good about them unless you like the blue colour. Where do I start?

Clamping. As previously stated they don’t. And even when you think they do, they don’t. Clamp up your work and leave it. In the morning all the Draper clamps are loose. they can only maintain the lightest of pressures. This is actually worse than a clamp which doesn’t work because it lulls you in to a false sense of security and the very real possibility of a future glue failure. Fail no: 1.

Sanding: Normally when I am sanding a piece of wood I clamp it to the work top to hold it. The Draper clamps are useless at this because the vibration of the sander is enough to loosen the clamps. Pathetic: Fail no:2

For a while I was almost impressed with the plastic tabs fitted to protect your work from damage but like the rest of the clamp I was soon to be disappointed. The round piece which goes on the end of the threaded part looked well located. These always have a habit of falling off. I have never known any clamp manage to hold on to these. Of course after a couple of tightens with the clamp, the plastic stretched and the protectors fell off.  Fail no: 3

Plastic protectors falling off is so normal that I cannot confess disappointment but what did upset me was the state of the metal under the plastic. The round part at the end of the threaded part is made from a thin piece of pressed steel without a flat base!!! This is the most basic thing to get right with a clamp. If the jaws are not flat and full they will more easily mark the work piece. Think of a stiletto heel on a wooden deck. Fail no: 4 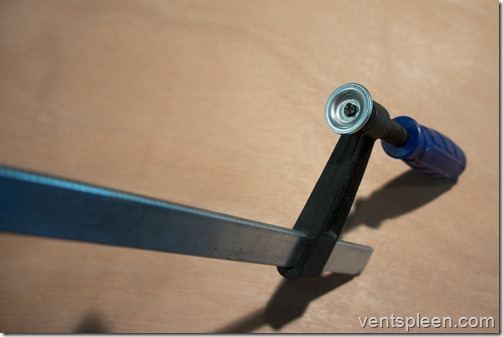 Nasty. Once the plastic protector goes, and it will you’re left with a material damaging piece. Even with the cap on it still marks the wood. 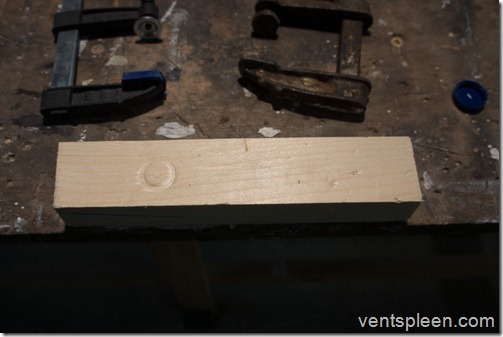 Two similar clamps. Draper on the left. Both tightened as well as I could to the same pressure. The clamp with a solid base has hardly marked the surface at all while the Draper one has left a huge dent.

Missing in the design is a decent sized tab at the top of the jaw, something to stop another clamp sliding down if you are using them clamp on clamp. These clamps were clearly not designed by anyone who has ever worked with wood. They probably copied some poorly tested existing design. Fail no: 5 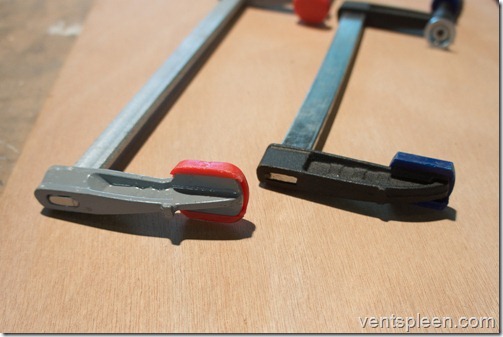 The Draper clamp has a small tab but it’s way too small to be effective when clamping clamp on clamp. The Axminster clamp on the left has a good sized tab.

The threaded part is very short. This would be fine if the jaws didn’t need so many turns to get them to tighten and what doesn’t help this is that the shaft of the clamp is too flimsy, no wonder the sliding jaw can’t get a grip on it, it has no surface area and on the clamps which do work, they bend alarmingly which is no problem in itself but with the bend comes a change in angle and now the clamp is no longer exerting a purely downward force but is effectively trying to slide the piece, just what you don’t want from a clamp. Unlike a more robust clamp, these simply stay bent. fail no: 6 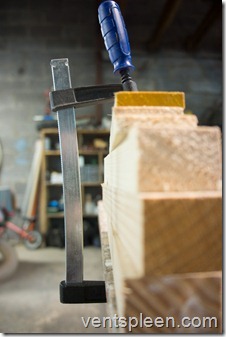 A shocking amount of bend. Note how the pressure is no longer downwards. Plus the clamp stays bent so now it always pushes the work down at an angle. 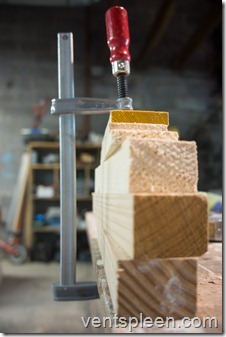 The Axminster F clamp under the same pressure. It does bend slightly but unlike the Draper one, it springs back straight afterwards. 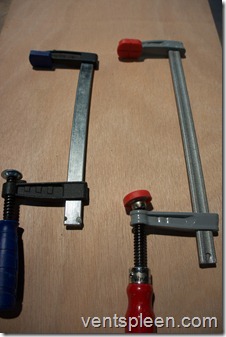 Here you can how the shaft is now bent and note also the short amount of thread compared to the Axminster version. The wood handle is more comfortable and most importantly, not made of plastic.

I might have forgiven the plastic handle if these clamps had actually clamped but as the rest of the clamp is so bad I cannot forgive it. If we are to use plastic in this world we must make sure it is not for single use or dubious products. fail no:7

How many fails is that? Far too many if you ask me for such a simple object. I wrote to Draper and they did admit they found the same non clamping issue on some of their other clamps and offered me some replacements but whether these will be any better is yet to be seen. No doubt Bert Draper (the founder) is turning in his grave as Draper celebrate their 100 years in business. Perhaps back then they had higher quality standards than they do today but if they carry on selling clamps as bad as this I very much doubt they will see another 100 years. If this is the best Draper can do when it comes to clamps what can I expect from their other products?

I did not even know it was possible to design and make an F clamp so badly but you live an learn. I think the most telling fact really is that even the nastiest clamps in my collection do that one thing which is truly needed from a clamp. they clamp. Everything else can be dealt  with but a clamp that won’t clamp is nothing more than a strangely shaped paperweight and an annoyance every time you see them because you know they don’t work.

Perhaps these companies do not understand the grief that selling a bad product causes the client. Apart from the fact that the clamps don’t work and there are not enough to do the job you bought them for, it is all a waste of my time and a waste of theirs. More needless transportation of goods being sent and returned. The company reputation takes a beating and here is one customer who is unlikely to buy another Draper product again.

It is possible to make a good clamp. I have several and the latest ones from Axminster (ones I had to buy because the Draper ones didn’t work) are a very good example of a well engineered clamp that works well with progressive tightening, smooth action and most importantly of all good clamping force that does not drop off spoiling your work. 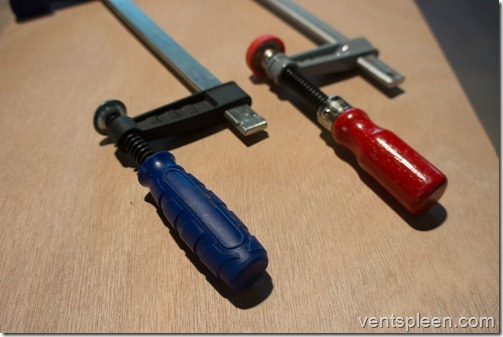 Really not very much to commend these clamps from Draper. They are without a doubt the worst clamps I have ever used in over 30 years and as a boatbuilder you can be sure I have used a hell of a lot of clamps in that time! If Draper would like to know what constitutes a good clamp they need look no further than the Axminster one.

There’s just no excuse for allowing such a poor product to be sold.