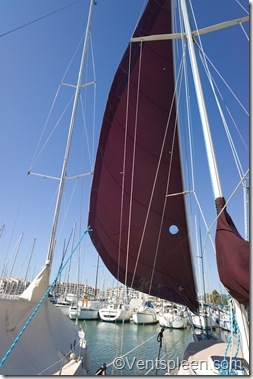 When the time came to replace the sails on the boat I was faced with a new dilemma, namely what to use for a UV strip. Previously the sails were hank on so were never out in the sun for months on end but now that I have roller furlers fitted it became an issue.

The sails on the boat originally were made by Ullman’s in California. They were excellent sails although they did fade quite a lot. What they normally do is sew on a white UV strip. I assume it is made from a special lightweight, yet strong and UV material since you do not want anything heavy on the leech of a sail. It will ruin the shape and spoil the air flow over the sail.

True racing boats never have UV strips. They either stow the sails after use or fit a sock over the rolled sail. I don’t like socks because they tend to make a noise when it’s windy, are fiddly and time consuming to fit every time, need stowing somewhere when not in use and another halyard to hoist the sock. As far as I am concerned, just too high a price to pay. I would prefer to lose a bit of sailing performance than go through all of that.

The options for UV strips are fairly limited. A very popular solution is to use Sunbrella. It is soft, doesn’t fade and looks good. The down side is that it is heavy, or rather too heavy for the small sails on my boat. Often thin sail cloth is used. It doesn’t last that long but it can be replaced when it is tired. So long as the fabric is light weight and protects the sail underneath from the sun, then it is fine.

When the time came for new sails, I asked the advice of Ullmans who have been making sails for a very long time. They suggested a sock but I rejected that, as I rejected all their other suggestions. Finally they suggested Tedlar. ‘You mean Kevlar’ I said. ‘No, Tedlar’ they said. What on earth is Tedlar I thought?

Tedlar is a thin and glossy Polyvinyl Fluoride Film which is made by Dupont. Surprisingly it has been around for over 50 years already and has been well proven, mostly as a backing for solar panels. 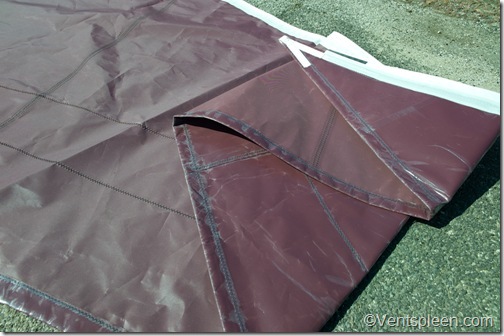 Here you can see the Tedlar UV strip up close.

So the question is, how will the Tedlar cope in the often brutal marine environment? Only time will tell. Ullmans said that it can be stuck directly to the sail but when you remove the Tedlar, it can leave ugly dirty glue marks. They said that the best thing to do was to stick the Tedlar onto a thin piece of matching sail cloth and then sew it on to the sail. That way, when the UV strip needs replacing, all you need to do is remove the cloth and replace it.

The advantages of Tedlar as a UV strip are: It is very light weight and flexible. It allows you to keep the original colour of the sails and I’m told not only protects the cloth underneath from UV but stops the fabric fading. It has a shiny finish which is a bit weird. It would be much better if it had a satin finish but then maybe the shiny finish will shed dirt better?

Will it work? How long will it last? I have no way of knowing. I asked  a sail maker locally what he thought of Tedlar as a UV strip. ‘Kevlar you mean’ he said. ‘No Tedlar’ I said. He had never heard of it. Amazing to think this product has been around over 50 years and no one has ever heard of it.

I will update this post annually as the sails get used. For now, I am happy to have furled tan sails without obvious UV strips attached. It will be very interesting to see how they last.